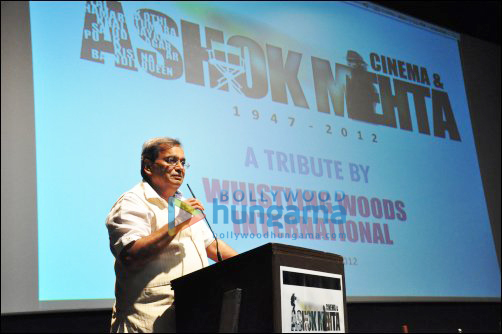 Subhash Ghai and Jackie Shroff paid a day long tribute to ace cinematographer Ashok Mehta at the Whistling Woods International (WWI) campus with veterans of the Industry and the family of Ashok Mehta. The campus was decorated with exhibits featuring the work of Ashok Mehta and there were special classes & seminars discussing films shot by Ashok Mehta and his work as a Cinematographer. Finally as a tribute, a screening of his directorial debut Moksh starring Manisha Koirala and Arjun Rampal was also shown to the students.

However, the real surprise of the day was when Ghai screened a song from one of his earlier shelved projects called Devaa which starred none other than Amitabh Bachchan. The song was the first time Subhash Ghai had collaborated with Ashok Mehta & Mr. Bachchan but unfortunately the film had to be shelved due to unavoidable circumstances. After the film was shelved, Ghai shifted his entire unit of technicians that were signed for Devaa, including music composers Laxmikant & Pyarelal, for his comparatively smaller budget film Ram Lakhan.

The song of Devaa received a standing ovation from the Students of WWI.