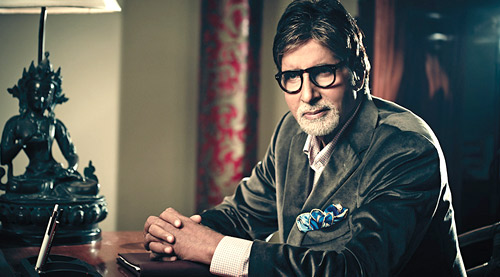 In Piku you play a very cranky patriarch who is obsessed with his bowel movements. Who and what are your inspiration to play this character?

I have no known reference, neither was I given one. This is the writer's and the director's image of what the character should be. As an actor employed by the production, I follow what is professionally desired of me.

I am not so sure that she is beleaguered. She is my daughter though, in Piku, and as co artists we do develop or aim to develop the kind of relationship the script demands. In that sense there is, and I would imagine should be a so called 'bonding' between us. In our profession I would expect that whatever we do in the sphere of the film in question is special.

Is there a special bonding between the two of you?

Deepika Padukone has been and is a wonderful co-star. There is a certain unwritten warmth about her, which flows not just on set, but off it too. I love such qualities. With our age differences and the character impersonation in our film, she comes across just perfectly.

You are known as Bengal's damaad. How Bengali did Piku make you feel?

Yes I am the 'jamai babu' of Bengal and proud of it! Piku the actor, does not need to do anything to make me feel Bengali, the character does. And having Shoojit, a Bengali, as director helped immensely. Nuanced behavior, language fineries, appearances and looks, all were meticulously worked on. Of course there have been some compromises, because we are making a Hindi film after all and had to make those few adjustments for its universal context. But the essence shall be quite visible we hope. At the same time, I do not think the overall appeal of a Hindi film shall be drowned. Regional colors have always enhanced our creative palette, and they have been greatly accepted and enjoyed by audiences. We hope that this attempt shall bring the same attention.

What was the experience of working in Kolkata like?

Did you draw from your own experiences with your daughter to play this character?

No... I did not. I did not find reason to. The script itself spoke well enough, and the brilliant writing by Juhi ji, never required any outside inspiration.

Piku also gave you a chance to reunite with one of your early costars Moushumi Chatterjee with whom you did Manzil and Benaam? Has she changed over the years?

Moushumi has not changed at all. She was Moushumi then, she is Moushumi now!

The year 2015 has been pretty dismal for Hindi cinema at the box office. Sir, what do you think are the reasons for films not doing well?

The audiences are not liking what they are being made to see... Simple!

What are the other films that you've signed?

After Piku there is Wazir jointly produced by Vidhu Vinod Chopra and Raju Hirani, directed by Bejoy Nambiar. Releasing on October 2, 2015. There are 2-3 other projects on the anvil. It would not be prudent or ethical to announce them just yet.

You recently paid a very successful visit to Egypt. All of us see you as India's most effective cultural ambassador abroad. Do you enjoy that role?

Yes, I was in Egypt for the opening of the festival "India by the Nile'. Egypt has been a most warm and affectionate country not just to Indian films but to India as well. These very consummate epithets that you structure around my name are unacceptable and not desired by me, but if my presence can bring glory and commendation to my country, I would gladly be involved in any such enterprise.