Despite many attempts, Sunny Leone hasn’t been too successful in breaking away from her sultry image. But her full-fledged South debut might do it for her! Fans of the actress may be aware that the actress is venturing into Tamil industry with a fantasy historic film. Titled Veermahadevi, the first look of the film was released recently on social media. 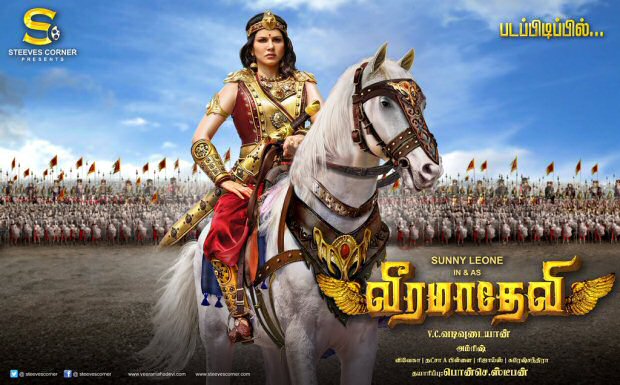 Sunny Leone plays the role of Veermahadevi – the warrior princess in this forthcoming VC Vadivudaiyan directorial. The actress took to Twitter to release the first look poster of the film earlier in the day. Her look in these posters looks not only mesmerizing but also fierce and powerful.

While most of her Bollywood films have revolved around romance, Sunny Leone will be seen in never-before-seen avatar in Veermahadevi. The film, which is also mounted on a large scale, will also see Sunny in an action mode. The actress had earlier revealed in a media report that she has undergone extensive prep for the film. She even undertook training in sword-fighting and horse riding for the role. She is even expected to take lessons to learn medieval combat since her character is that of a warrior.

Deviating from her sexy avatars, this role of warrior princess, as described by Sunny previously, is something that the actress dreamt of doing. She had even mentioned that even though she found it challenging, she was pretty excited about the character. In fact, she was ready to take up any extra lessons the role required, even if it meant shuttling between Los Angeles and India. She even decided to break the language barrier by learning Tamil. She attended workshops for the same.

Veeramahadevi is also said to star Navdeep in a negative role. Last we heard is that the film will release in five languages, namely, Tamil, Telugu, Malayalam, Kannada and Hindi.