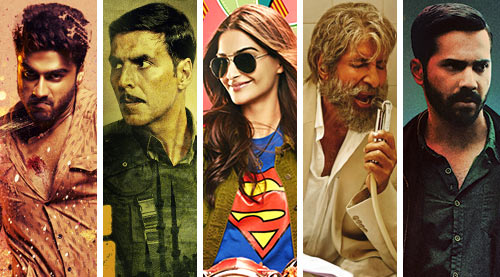 The lineup of films in 2014 was not that impressive. But things may change dramatically in 2015 with a lineup of fast and furious flicks. Here's a list of the films that promise to make 2015 a redemptive year after 2014.

Baby: Baby, this you gotta see. An edge-of-the-seat thriller set in the dark world of global terrorism. After a string of comedies Akshay Kumar gets serious again. Director Neeraj Pandey earlier helmed the heist film Special 26 with Akshay and an ensemble cast. Baby is Pandey's most expensive film, especially special because it marks the launch of former Viacom 18 COO Vikram Malhotra's production company.

Dolly Ki Doli: Sonam Kapoor plays a con-girl with crazy ambitions. Her bizarre bridal get-up is already a hit. Now for the film...Rajkummar Rao shakes a leg with producer Arbaaz Khan's better-half Malaika...and gives her a run for her money. Looks like fun from first-time director Abhishek Dogra.

Hawaizaada: This is the true-life story of 19th century scientist and aviation pioneer Shivkar Bapuji Talpade in a period film directed by Vibhu Puri. Ayushmann Khurrana worked his butt off to get the body language right.

Shamitabh: R. Balki who earlier gave us the unforgettable Cheeni Kum and Paa teams up again with the Big B for a film set in the entertainment industry. The film also stars Dhanush and introduces Kamal and Sarika Haasan's younger daughter Akshara. Promises to be interesting.

Badlapur: Varun Dhawan's change of image. He plays a man with a past on a rampage. The dark thriller is directed by Sriram Raghavan whose last film was Agent Vinod. We won't hold that against him.

Guddu Rangeela: From Subhash Kapoor who gave us the very enjoyable legal satire Jolly LLB comes this comedy-actioner set in Haryana with Amit Sadh, Arshad Warsi and Tapsee Pannu in the lead. This could be the big-little film of the year.

Main Aur Charles: The underrated Prawaal Raman directs this bio-pic based on the life of Charles Sobhraj. Randeep Hooda plays Charles while Adil Hussain is the cop-narrator.

Gabbar: Producer Sanjay Bhansali and leading man Akshay Kumar last got together for the rumbustious Rowdy Rathore. This one helmed by Telugu director Krish is a remake of the Telugu blockbuster Ramanna.
Release date: April 3

Phantom: Saif Ali Khan desperately needs a hit; Kabir Khan's espionage thriller which pairs Saif with Katrina for the first time may just do the trick. Kabir has already shown his adeptness at international intrigue in Ek Tha Tiger. Maybe Tiger Pataudi's son's time re-starts with this one?

Piku: Shoojit Sircar helms a human drama featuring the never-before matchless mix of Amitabh Bachchan, Irrfan Khan and Deepika Padukone. After Vicky Donor and Madras Cafe this promises to be another universe altogether.

Bombay Velvet: Mumbai in the 1960s recreated in Sri Lanka. Ranbir Kapoor gets together with Anurag Kashyap. Deadly!

Welcome Back: Anees Bazmee's sequel to Welcome features John Abraham who was not seen in 2014 at all, together with Nana Patekar and Anil Kapoor. May the 'farce' be with you.

Dil Dhadakne Do: Zoya Akhtar has accumulated the most amazing cast: Farhan Akhtar, Anil Kapoor, Ranveer Singh, Priyanka Chopra...Off they go on a cruise to discover some home truths about a dysfunctional family.

Brothers: Set in the violent world of boxers and boxing this one again offers Akshay Kumar a chance to go beyond the comic kingdom. Sidharth Malhotra plays Akshay's kid brother while Karan Malhotra directs.

Jagga Jasoos: Bring out the laddoos. Anurag Basu and Ranbir Kapoor together again after Barfi. Yummy! But there is Katrina Kaif with Ranbir. We all know what happens to films featuring real life couples.

Prem Ratan Dhan Payo: Prem and proper Sooraj Barjatya and Salman Khan are back together again. Promises to bring back the pristine-pure Prem of Hum Saath Saath Hain.