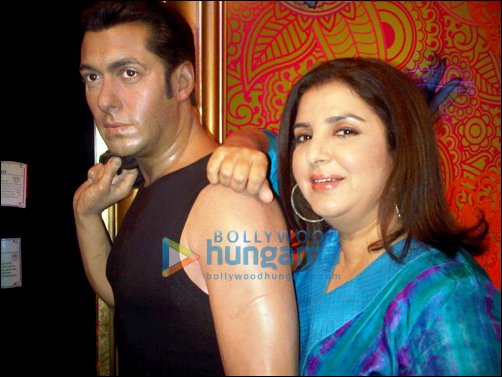 This one qualifies as a straightforward uncontested entry in Ripley's Believe It Or Not. When news reached these shores that last week on April 18 at an event in London, Farah Khan was mobbed in the presence of Hrithik Roshan by scores and scores of screaming fans while the bemused Roshan superstar looked on, it sounded like a publicity gambit by the television channel for whose dance reality-show Farah was shooting.

But it turned out to be true!


Farah was indeed mobbed over and above Hrithik Roshan. This happened at the Madame Tussauds's wax museum where the television crew had gone to shoot a promotional clipping for their show. They wanted to film Hrithik sharing screen space with his wax statue.


According an eyewitness, "There were at least 2,000 Indians at Tussauds gathered to see the heart-throb Hrithik Roshan. But when he arrived at the venue with Farah Khan they completely went for Farah screaming as if she was a rock star. Hrithik grinned and looked on indulgently. But we could see he was taken aback by the turn of events."


When asked about the incident Farah who is just back from the experience laughed, "Can you believe it? Duggu was there and I still got attention. Yes I was mobbed (laughs). Did I get more attention than Duggu? That I wouldn't know. But I was taken aback by how much the Gujjus and the Punjabis in London liked me. I guess I've a fan club there."


Farah only wishes she could've enjoyed the attention and the adulation. But she was too busy missing her children. "I couldn't take them along because it was a hectic work with no room for any break. I was gone for a week and it seemed like a year without my kids. I wish they were with me to see their Mom being mobbed."


Interestingly, Farah got herself clicked with Salman Khan's wax figure at Tussauds. An indication of who's to star in her next directorial venture.