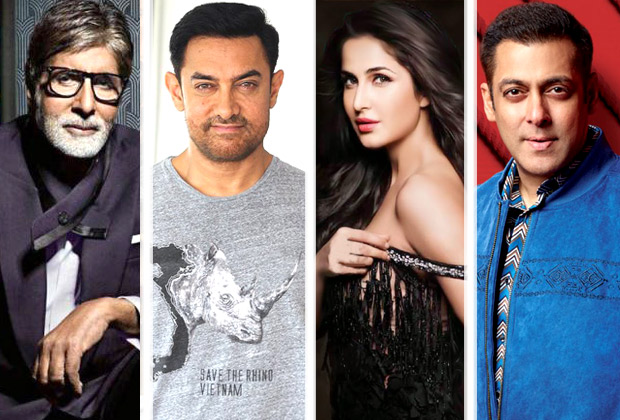 The recent announcement of Amitabh Bachchan and Aamir Khan as a father-and-son combination in Aditya Chopra’s production Thugs Of Hindostan has been regarded as one of the biggest casting coups in recent times.

A week later, Aditya Chopra also announced the sequel to their 2012 film Ek Tha Tiger, to be helmed by Ali Abbas Zafar and called Tiger Zinda Hai. The film will star Salman Khan and Katrina Kaif, which is also a coup in two respects: one, normally, heroines are rarely repeated in a sequel (exceptions like Dabangg 2 and Krrish 3 prove the rule!) and two, Salman and Katrina continue to do films years after their personal break-up—in that sense, the first film was a coup too, but this one’s another and possibly bigger one!

So what is a casting coup? In Hindi cinema, it amounts to a really major combination of stars, usually of the same gender, and if there are reasons why they have terminated a special relationship, even a male-female combination comes in. For example, Ranbir Kapoor and Deepika Padukone worked twice together after they split as lovebirds—in the 2013 Yeh Jawaani Hai Deewani and the 2015 Tamasha, the former a blockbuster, the latter a washout.

In a nutshell, a casting coup always means an unexpected casting that is remarkable in terms of the surprise element. Another standout example: Amitabh Bachchan, Jaya Bachchan and Rekha in Yash Chopra’s Silsila, in a story that even paralleled their real-life relationship!

Another example: with Qayamat Se Qayamat Tak and Tezaab releasing in the same year, and their future graphs, Juhi Chawla and Madhuri Dixit-Nene (then Dixit) were considered to be close rivals by the early ‘90s. There was buzz about them not being on cordial terms, a buzz neither confirmed nor dismissed. Well, past their primes, the two came together in the female-dominated Gulaab Gang as antagonist and protagonist in a face-off on screen. The quality of the film, however, was enough to make it sink without a ripple.

At their peaks, star-singers Suraiya and Noorjehan, both Naushad discoveries, were bitter rivals to each other. Both of them agreed to co-star in the 1946 hit Anmol Ghadi, but musically and otherwise, it is said that Noorjehan overshadowed the former. However, after Independence, Noorjehan migrated to Pakistan and soon, Suraiya began losing out to the new sensation and playback singer, Lata Mangeshkar. 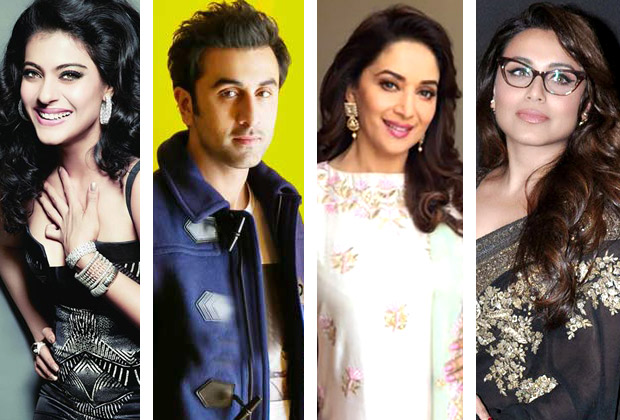 Dilip Kumar was the acknowledged superstar of those times along with Raj Kapoor and Dev Anand. He never forfeited any chance to co-star with either of them, doing one love triangle with Raj Kapoor and Nargis in the 1949 Andaz and another with Dev Anand and Bina Rai in the 1955 Insaniyat. With both, he entrenched his position as the Tragedy King!

Dilip Kumar next had a screen confrontation with Raj Kapoor’s father and ‘30s mega-star Prithviraj Kapoor in the 1960 classic Mughal-E-Azam as Prince Salim loving a courtesan Anarkali (Madhubala) and Prithviraj as the angry Emperor Akbar opposing their love. The on-screen clashes between the two stalwarts as well as between Prithviraj and Madhubala were highlights, but by then, even the lead pair’s casting became a kind of coup since they had an affair in real life forbidden by her real father, and leading to animosity!

Dilip Kumar’s next memorable coup was with his wife Saira Banu, 24 years his junior, who rekindled his career after two flops with the 1970 melodramatic hit Gopi. Their later films, however, could not sustain the magic. When Dilip Kumar staged a comeback as a star character artiste, we again had him take on a superstar—Amitabh Bachchan. The casting of the two together with the Sholay combination of Ramesh Sippy and Salim-Javed in the intense Shakti remains a benchmark, despite the fact that the film did just average business.

In 1973, with Dharmendra and Hema Malini being a hot pair and Sanjeev Kumar having a soft corner for Hema, Ramesh Sippy launched Sholay with all three of them along with the Zanjeer-Abhimaan-hot husband and wife pair of Amitabh Bachchan and his wife Jaya. In an era when multi-star films were just taking off, it was a terrific casting.

Yes, multi-star films were not at all in fashion in olden times. And so, the two big examples, both blockbusters as well as epics in the way the characters were written, were the 1957 Mehboob Khan film Mother India (Nargis with upcoming heroes Raaj Kumar, Rajendra Kumar and Sunil Dutt) and the 1966 B.R. Chopra movie Waqt (with Sunil and Raaj again, paired with Sadhana in a love triangle and the younger pair of Shashi Kapoor and Sharmila Tagore).

Before we go on to the later films, we must mention the unique case of the 1951 Awara made by Raj Kapoor. Not only did it star him with Nargis after hits like Barsaat and Andaz, it also had his father Prithviraj Kapoor, his younger brother and future top star Shashi Kapoor playing Raj Kapoor as a kid, and his grandfather Dewan Bashwanath Kapoor in his only film appearance in a cameo. Prithviraj, of course, played Raj’s (and therefore Shashi’s) father. The film thus starred four Kapoors from three generations!

Later Prithviraj, Raj and Raj’s elder son Randhir Kapoor starred in RK Films’ Kal Aaj Aur Kal (1971), with Babita, then Randhir’s ladylove and to-be wife, as his heroine and in-film girlfriend. Though cast in roles just like their real-life relationships, the film bombed because of a weak script.

The Kapoor brothers—Raj, Shammi and Shashi—were stars of different hues in their own right, so when they came together in a non-multi-star era, it did become news. Raj and Shammi collaborated on the offbeat K.A. Abbas film Char Dil Char Raahein (1959), while Shammi and Shashi collaborated as qawwals in cameos in the Pradeep Kumar-Geeta Bali film in 1963, Jabse Tumhe Dekha Hai produced by Anil Kapoor’s father, Surinder Kapoor.

The last casting coup from the Kapoors came in the 2013 fiasco Besharam, which cast Rishi Kapoor and Neetu Singh as a husband-and-wife team of cops,while their real son Ranbir Kapoor, playing a wayward youth who reforms, is adopted by them in the end! 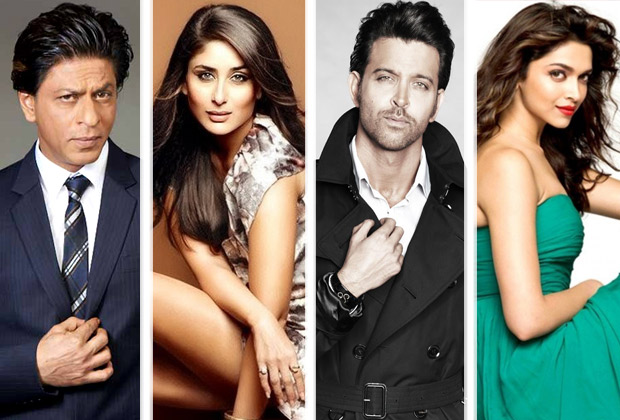 In 2001, Karan Johar did a Salim-Javed and cast superstars of three generations—Amitabh Bachchan, Shah Rukh Khan and Hrithik Roshan in his family classic Kabhi Khushi Kabhie Gham…on parents and their two sons. What’s more, he cast their most memorable co-stars with them in the first two cases—Jaya Bachchan and Kajol respectively. With Kareena Kapoor Khan opposite Hrithik and Rani Mukerji in cameo with Shah Rukh again, the film was a big cast film.

Finally, we mention four films in which there was a cavalcade of cameos, mostly by big stars. The first was the 1960 film starring Dev Anand, Waheeda Rehman and Nanda—Vijay Anand’s Kala Bazar, which had cameos by ‘30s star and Saira Banu’s mother Naseem Banu, singer Geeta and her actor-filmmaker husband Guru Dutt, Dilip Kumar, Kishore Kumar, Raaj Kumar, Rajendra Kumar, Nadira, Nimmi, Nargis, Lata Mangeshkar, Mohammed Rafi, actor-filmmaker Sohrab Modi and others all playing themselves at a film premiere!

There was Hrishikesh Mukherjee’s Guddi (1971) starring Dharmendra and Jaya Bhaduri (as Jaya Bachchan was called before marriage) and starring a plethora of top names from Dilip Kumar to Shatrughan Sinha in cameos—many of these appearances were sequences shown from films under production.

The third example was the 1981 multi-star Naseeb, in which the cameos added to the multi-star charm, showing actors at a film party in which Amitabh Bachchan was a waiter. The cameos were led by Raj Kapoor, Shammi Kapoor and

Waheeda Rehman, while the fourth was Farah Khan’s open tribute to Naseeb, the 2007 Om Shanti Om, where a film party had big stars from Amitabh Bachchan and Rekha down, adding to a featured cast of Shah Rukh Khan, Shreyas Talpade, Arjun Rampal and debutant Deepika Padukone!