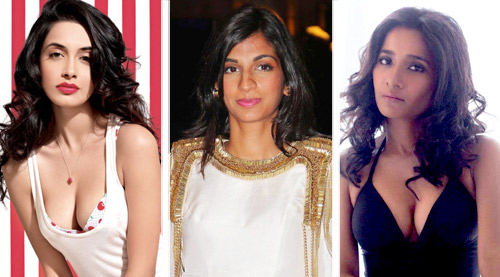 adopts for his truly commercial take, Angry Indian Goddesses. What's the question about? Well, when a young married

woman realizes that her best friend is actually a lesbian, she wonders how does she 'do it'. Even as the girls around them

break into a chuckle, the one who is 'coming out of the closet' - explained in a unique dumb charade - quickly indulges into a

PDA with her lover.

Well, as an audience, you get used to the world that Pan Nalin (Samsara, Valley of Flowers) creates once a rapid

Sarah-Jane Dias is a photographer wondering about all the fuss surrounding fairness creams, Amrit Maghera is an aspiring

actress who is baffled that she needs to rely on men (read, heroes) for defending her honor, Sandhya Mridul is a Corporate

woman who sprints from her Board room meeting to a pool and strips down from her suit to a two piece bikini on her way, Pavleen

Gujral is a gold medalist girl who doesn't mind getting into BC-MC stuff with the voyeurs, Anushka Manchanda as a singer-

Together, they are Angry Indian Goddesses and except for one (forced) scene where they do pose as Maa Kali, they don't make

much noise about it but only do it through action. Really, even that pose could well have been left aside. However, perhaps it

was the lure of reaching out to international audience through festival circuit that the scene was actually retained.

film Festival). Trust me, it is as commercial as it gets. With a definite first, second and third act to it, the two hour long

film has everything, except for a mandatory 'party/daaru' song (thank goodness for that). Other that, it has all the

ingredients that are needed to make an entertaining urban film and in that aspect, Pan and his team of actresses score

While Sarah is a revelation and is truly different from her Kya Super Kool Hai Hum mode, Sandhya delivers a power packed

performance all over again. Pavleen is the find of the year so far and impresses tremendously in her debut act. Anushka has

been around for a while now in the world of music and acting and in a role tailor-made for her, she excels. Amrit, referred to

as 'one of those Katrina types' (since she is a half-British-half-India looking at making it big in Bollywood), delivers a

mature performance while Rajshri, seen in bit roles for a while now, has her mind in the right place as she emotes. As for the

most seasoned of the lot, Tannishtha Chatterjee, she comes late in the day but fits in well.

So what does the film basically convey? Well, in a story which is about Sarah calling her bunch of friends to her native place

in Goa and announcing her marriage, the narrative takes many steps ahead than being just a buddy outing. The vulnerabilities,

desires, sexual needs, balance between personal and professional lives, insecurities, being comfortable with your own skin,

progress and liberalization, living life to the fullest, standing up for the right things and the essence of friends forever

are just some of the many elements that Angry Indian Goddesses brings in, which make for an attentive viewing.

What makes it all so much possible, other than direction and acting of course, are dialogues (witty, sharp, impulsive), editing

(super snazzy) and music (perfect blend) that make it a fun affair for most part of the film. As for the twist in the tale

during the third act, the dramatic encounters don't slow down the pace of the film but instead glue you to the screen as you

get as horrified as the characters. Really, it is a masterstroke by Pan as he neither makes Angry Indian Goddesses a

Yes, the concluding scene with Adil Hussain (playing a cop) is out and out filmy and while it is fitting enough to make you

feel that it is the right culmination after all, in the context of the film which took a realistic path all this while, one

just feels that it is a tad too convenient.

However, for a film which dares to tell a new tale and uses a male protagonist (Arjun Mathur - reliable as ever) for just one

scene with rest of the affair entirely focusing on the women in question, it is not a bad bargain after all.

“Ali Abbas Zafar is the real Nawab in…