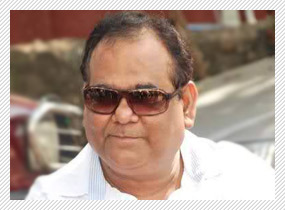 If you'd sit down with Satish Kaushik and hear him talk about his B-town journey, you may have the occasional tear rolling down your cheek. But when you see this magnificent actor on screen, he'll guarantee you laughs and only laughs. Such is his personality. I recall seeing Satish for the first time when I saw Jaane Bhi Do Yaaron on the VHS tape back in the days. I think it was early 90s. Today, we know him better as Calendar from Mr. India, Kashiram from Ram Lakhan, Pappu Pager from Deewana Mastana, Mutthu Swami from Saajan Chale Sasural and Chanu Ahmed from Brick Lane. But it wasn't his charm in acting that we all fell rolling on the floor for, no. It was also his penchant in writing dialogues, then scripts and eventually directing that made Kaushik one of Hindi cinema's most versatile individuals. Satish's first film as a dialogue writer was the cult classic Jaane Bhi Do Yaaron. He recalls, "It is a very funny story. Actually I had finished Masoom shooting in Nainital and Delhi in which I was assisting Shekhar Kapur. One day I went to meet Ranjit Kapoor and there was Kundan Shah who was there and had come to sign Ranjit for JBDY. We were having tea and suddenly Ranjit sprung up and asked Kundan - 'Kundan I would like to write the dialogues along with Satish because he has a great sense of comedy. We will share the credit and out of 5000 rupees you are giving me, pay 2000 rupees to Satish'. Kundan agreed and that's how I got into writing for JBDY."

Everyone was on the edge of establishing themselves as actors in the Hindi Film Industry and wanted to make a mark. But little did each one of them know that they would eventually be tagged as 'greats in acting' in their own space. Even Satish couldn't see the fame and fortune coming. "After Jaane Bhi Do Yaaron, I got to do Jalwa, Mr. India and Ram Lakhan. The ball started rolling and then there was no looking back."

Satish Kaushik's success is proof that you can be well-adjusted and still be funny, that you can surround yourself with family, with like-minded producers and directors and actor friends and be just as real and rude and ruthless when it's time to make the jokes in front of the camera. The actor recalls his Jaane Bhi Do Yaaron days, "There are many nostalgic and funny moments we spent on the sets and off it but I cannot forget the first day shoot where me, Pankaj, Satish Shah, Neena Gupta and cameraman Binod Pradhan where in a hanging trolley suspended in some under construction building where we were filming. I asked Kundan why this dangerous way of shooting on the first day? Kundan said, "If some calamity happens then I can change the actors and cameraman." We burst into laughter. Such was the humour back then but I'm sure these veterans haven't lost the old world charm of making you giggle. We may find Satish's humour intact but do we still get to see such films? "Such films are just made and not planned. Even we did not know that it will acquire a cult status and everyone will be talking about it even after so many years and it will be re-released in restored version after 28 years. It's unbelievable and you cannot repeat that magic."

While we still remember most of the characters from Jaane Bhi Do Yaaron, the one Satish would love to play is of D'Mello, formerly portrayed by Satish Shah. Kaushik quotes, "Not only me but everybody would've loved to play D'Mello. He was so lively being dead. It's like he gave more life into his death. He was outstanding. A role that is very difficult to play onscreen. Not many actors can do that."

But it was Satish's character in Saajan Chale Sasural in 1996 that he considers his 'dream-come-true'. The actor recalls, "I have seen Padosan umpteen number of times since my school days. I was so charmed by Mehmood bhaijaan's performance that when I got into acting, the only role I wanted to play was Mehmood's South Indian masterji and by the grace of God I got this opportunity to play my dream role in Saajan Chale Sasural. I won the Filmfare award later for my performance."

Watch the video: "Jaane Bhi Do Yaaro Was To Be Anupam Kher's First Film...": Satish Kaushik