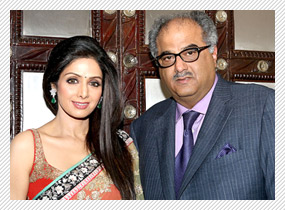 More than one and a half years after its theatrical release in India, Sridevi and Gauri Shinde's English Vinglish continues to make waves internationally. This time around, it is Japan's turn to embrace the film. Very recently this Eros production was specially screened for the wife of Japanese Prime Minister, Indian ambassador and other bigwigs. For this, Sridevi traveled along with hubby Boney Kapoor and her two daughters.

In an exclusive conversation, Boney Kapoor gives a lowdown on the developments.

Apparently, wife of Japanese Prime Minister was quite moved by the film, right?

Yes, we had a fabulous reception there. Fans, audience and the media have received the film very well. When the film ended, wife of Japanese PM had moist eyes. She was emotionally choked. Even the Indian ambassador had no words to express how good the film was. She was totally overwhelmed.

No wonder, in Japan a restaurant has also added a special 'Shashi' (name of Sridevi's character in the film) dish in their menu.

Can you believe that (smiles)? Even we got to know after we had left for India. I guess the owner of the restaurant was equally delighted. There is this entire meal named as 'Shashi Meal'. Of course, it includes 'Ladoos', a delicacy that Sridevi excels in English Vinglish.

For someone who is excelling in the film industry for four decades now, she is still making people proud, and especially you as a husband, isn't it?

I am absolutely overwhelmed. Today, story oriented and concept based films are coming up. Earlier, some films were only using her for her star power. Now, the films and the roles that she takes are concept oriented and character driven. This is the beginning of her second innings. In fact this could be even better than her first innings.