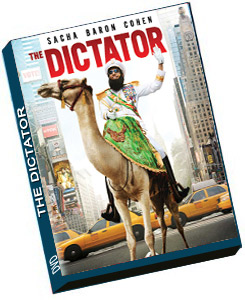 It's a pity that The Dictator starring the inimitable Sacha Baron Cohen never made it to Indian theatres. However the hilarious film is now out on DVD and in case you haven't watched it yet, watch it pronto!

Sacha Baron Cohen stars as Admiral General Aladeen, an eccentric, oppressive ruler of the North African Republic of Wadiya. Anything and everything in Wadiya happens as per his whims and fancies. He hosts his own version of the Olympic games known as the Wadiya games and even modifies the Dictionary just the way he likes it to be. When he is not busy sleeping with the likes of Megan Fox, Halle Berry etc, Aladeen along with his team of scientists is focused on building a huge nuclear missile that will make Wadiya a nuclear super-power. Aladeen's life takes a 360 degree turn when he is kidnapped and replaced by a body-double during a trip to the U.S. to address members of the United Nations (UN). Unrecognizable without his trademark beard, Aladeen must now fight a tough battle to prove that he is actually the General of Wadiya and not an imposter. Whether he is able to succeed in his mission forms the rest of this hilarious joyride.

Needless to say The Dictator rests solely on Sacha Baron Cohen's performance that will have you laughing till your stomach starts aching. His one-liners, his expressions, his body language is simply outstanding and he once again proves that he is among the funniest actors in the business. Note the scene in which he scares the living daylights out of a co-passenger aboard a flightâ€¦its simply hilarious. Anna Faris is decent in a supporting role and so is the ever-reliable Ben Kingsley.

The Dictator is a hilarious joy-ride that is not to be missed especially if you are a fan of Sacha Baron Cohen and his quirky sense of humour. However one wishes that the DVD had some funny special features to boast of. That would have been the perfect icing on the cake. Nevertheless, this one's a must-watch