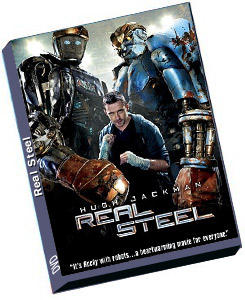 Real Steel is set in a futuristic world where human boxing is passe and robot boxing is the latest fad. Charlie Keaton (Hugh Jackman) plays a former boxing champ who is now struggling to make ends meet and tries to make a living by procuring robots to fight for him. After one his bots Ambush is damaged beyond repair in one of the local fights, Charlie is deep in debts. That's when he also comes face to face with yet another burden in the form of his 11 year old son Max (Dakota Goyo) who has just lost his mother. Charlie reluctantly agrees to look after his kid for a few months in change for a few thousand dollars till his legal custodians return from their vacation. Charlie and Max don't really hit it off well with Max's over-enthusiasm annoying Charlie no end. The money is then used by Charlie to buy another state of the art robot Noisy Boy but as luck would have it, Noisy Boy also gets thrashed badly in an underground fight. Charlie is left with no option but to rob metal parts from a junkyard one night when Max stumbles upon an outdated scrap-yard robot named Atom. Max insists that they take Atom along and try to resurrect it with help from Charlie's good friend Bailey (Evangeline Lilly). Atom starts working much to Charlie's surprise and Max's delight and the duo begin training him using shadow boxing and voice command. Soon Atom starts winning fights and earning rich dividends for Charlie and its time to take things to the next level and give a shot at the World Robot Boxing championship. After knocking down the two headed monster robot Twin Cities, Max challenges the world champion Zeus to have a fight with his robot Atom resulting in a nail-biting David v/s Goliath kind of a climax.

The strength of Real Steel lies in its treatment and the way director Shawn Levy has managed to craft a beautiful father-son relationship story against the backdrop of robot boxing. The animation used for the creation of robots is outstanding and the film boasts of some spectacular VFX. Special mention also of the remarkable sound design and the brilliantly choreographed fight sequences.

As far as performances go, Hugh Jackman is brilliant as Charlie effectively managing to portray a gamut of emotions and delivering a Knock-Out performance. Dakota Goyo is a revelation and one of the brightest child actors in recent times. The scenes in which he trains his bot Atom to dance showing him some mean moves are outstanding. Evangeline Lilly does a fair job.

The film's duration is 126 minutes

The film has 3 sub-sections in the Special Features as follows:

Making of Metal Valley: - A brilliant behind the scenes look at what went behind the making of metal valley, the junkyard from where Charlie and Max find their favourite robot Atom. Director Shawn Levy takes us through the 4 days of shooting in an old, dilapidated company which he and his team converted in Metal Valley. Production designer Tom Meyer takes us through the effort that went behind creating the right look and feel for Metal Valley while we are also given a sneak peek through Joe (the SFX coordinator) on how they managed to shoot the all important scene. As many as 80000 gallons of water were used to create the rainfall effect in the metal valley sequence. We also get a look in at how Dakota's body double managed to pull of the deadly stunt in which he slips off the cliff.

Building the Bots: - This section gives us a sneak peek at how the team went about creating as many as 19 different robots for the film. The entire process of building the bots took over 2 months and was done at Legacy Effects in San Fernando, CA and it's the same studio that has worked on films like Terminator 2, Iron Man series and the Jurassic Park series. This section also shows how each robot was designed and created by the team giving it a unique individual personality. One of the highlights of this section is the interaction between executive producer Steven Spielberg and director Shawn Levy.

Bloopers: - This short 2 minute episode features the bloopers shot during the making of the film. Surely makes for an entertaining watch.

Real Steel is one those films that you should have watched on the big screen. In case you haven't, it certainly would be a good idea to get hold of the DVD and enjoy a heart-warming father son drama set against the thrilling backdrop of futuristic robot mixing. The brilliant special features are only an icing on the cake. Highly recommended.