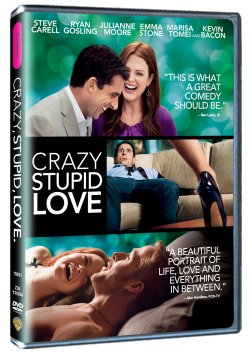 Crazy Stupid Love is a humorous take on the complexities of modern day relationships seen through an assorted bunch of characters. Cal Weaver (Steve Carell) thinks that he is in a happy marriage with Emily (Julianne Moore) until one fine day, Emily reveals that she is having a scene with her office colleague David Lindhagen (Kevin Bacon). Emily even asks for divorce leaving Cal shattered. Sitting lonely in a bar, Cal encounters chick-magnet Jacob Palmer (Ryan Gosling) and wonders curiously how Jacob seems to have a way with girls. Jacob meanwhile is trying his best to hit on a PYT in the bar Hannah (Emma Stone) but to no avail. A chance meeting with Cal and Jacob realizes that he needs to give Cal some much needed advice on matters relating to the fairer sex. After spending a few days under Jacob's tutelage, Cal undergoes a metamorphosis and even finds himself a date in the form of an alcoholic teacher Kate (Marisa Tomei). Amidst all this, there is also an interesting sub-plot revolving around Cal and Emily's teenage son Robbie (Jonah Bobo) who is smitten by his baby-sitter Jessica (Analeigh Tipton). How these various characters cross paths and come together in a hilarious yet heart-warming climax forms the crux of this enjoyable flick.

While the screenplay and direction is superb, it's the performances which elevate the proceedings to a large extent. Steve Carell is heart-warming and so is Julianne Moore. Ryan Gosling is cast perfectly and does justice to his part. Emma Stone looks cute and acts decently. Kevin Bacon doesn't get much scope while Marisa Tomei shines in a couple of sequences. Jonah Bobo too impresses as Robbie.

The film's duration is 118 minutes

The Special Features section includes more than a dozen deleted scenes. However, only a few of them make an impact while the rest can be easily skipped. Among the funny deleted scenes is an interesting bathroom conversation between Jacob and Cal. There is also a hilarious scene in which Hannah's best friend Liz proposes to Jacob in the bar. Last but not the least is a look at the alternate ending which does make you smile.

As a film, Crazy Stupid Love is a delightful watch for all those who enjoy light hearted romantic comedies. The film not just makes you laugh but also tugs at your heartstrings courtesy some really brilliant performances. The DVD could have done with some more interesting special features. Nevertheless it's surely worth a buy!