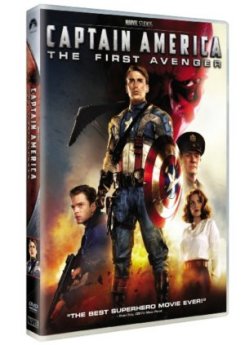 If you are a fan of superhero flicks especially the ones from MARVEL, chances are you will like Captain America: The First Avenger. The film is set mainly in the 1940s when America has entered World War II. A young and emaciated teenager Steve Rogers (Chirs Evans) tries hard to get in to the US Army but is rejected as he is asthmatic and too frail to be in the Army. Meanwhile his friend James Barnes aka Bucky (Sebastian Shaw) gets selected and assigned to the 107th Infantry.

Meanwhile somewhere in Norway, a high ranked Nazi General Schmidt (Hugo Weaving) ransacks an ancient ruin in search of the Cube. Schmidt who heads Nazi's secret research department HYDRA wants to take control over the world through his own evil, menacing ways. A chance meeting with Dr. Erskine (Stanley Tucci) gives Rogers a chance to volunteer to be a part of a series of experiments for US Army's Super Soldier Program. An injection of serum sees the lanky Rogers transformed into a well beefed up, muscular

Man who eventually through a chance of fate ends up becoming Captain America. The rest of the movie is about our superhero's mission to save America and the world at large from the evils of Schmidt who has now himself transformed into the monstrous looking Red Skull. Captain America is aided in this mission by the beautiful Hayley Atwell who plays Agent Carter, eccentric billionaire Howard Stark (Dominic Cooper) and veteran actor Tommy Lee Jones who plays Colonel Phillips.

Considering that the film depicts the rise of one of the first superheroes of the Avenger series, there is more emphasis on story and character build-up rather than heavy duty action sequences. Nevertheless the scene where Rogers as Captain America single handedly penetrates Schmidt's Nazi camp freeing hundreds of prisoner is quite mind-blowing. Even the climax fight sequence set amidst the Alps is breathtakingly shot.

As far as performances go Chris Evans is aptly cast as Steve Rogers aka Captain America. The actor looks the part and gives a convincing performance. Hugo Weaving as Schmidt could have been more menacing. Veteran Tommy Lee Jones does provide a few laughs through his wry sense of humour while Dominic Cooper playing Howard Stark entertains whenever he appears on screen.

Joe Johnston who has directed films like Jumanji, Jurassic Park III in the past does a fair job of re-creating the World War II era which gives rise to one of the first super-heroes in the form of Captain America.

The film's duration is 120 minutes

This 10 minute capsule gives a brilliant insight into what went behind getting the right look for Captain America. The makers discuss how they arrived at the right costume for the superhero and even minute details like his weapon Shield and his helmet were selected after much consideration

A short prelude where we are given a sneak peek at what to expect from The Avengers, one of the most anticipated films of 2012

-Animated Trailer of The Avengers

For those who missed watching it on the big screen, Captain America makes for an interesting DVD watch. Considering Captain America features in The Avengers in 2012, getting a fair idea of what the character is all about would be a good thing to do.

Christmas 2019 Special: Get in the holiday…