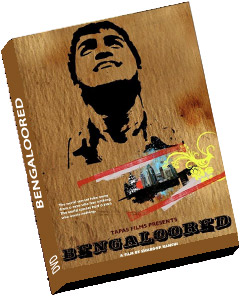 There aren't many independent films made in India. And even if they are made, only a select few manage to make it to theatres. Bengaloored too had a similar fate when it didn't quite find a good theatrical release for itself last week. So now that it has arrived on the DVD, one is reasonably interested in checking out what the film intends to tell. Though expectations are kept at the minimal, one does wonder whether the film may end up surprising. Alas, this doesn't quite happen as Bengaloored turns out to be one painful watch that seems much longer than its 110 minutes duration.

The story is told through the eyes of a young man (Harish Raj) who, after spending a decade abroad, returns to his time town Bangalore. There he sees the entire social, economic and cultural shift with around half a dozen people in his life going through a sea change. So while a man who was once his inspiration has now hit the bottle, his friend has turned into a Godman and taken the route of spirituality. His secret crush (Meghana) is giving him confusing signals around her affection for him while with his dad; he has strained relationships, especially after the death of his mother. This is not all as his ancestral house too is getting threatened due to ongoing development in the city.

With no real story to boast of and just a series of incidents filling up for Harish's life story, Bengaloored seems mostly purposeless for its entire duration. Scenes are fitted against each other at director's own will and only at places does a series of events give any semblance of a story movement.

Moreover, there is 'amateur' written all over this near two hours affair. Whether it is in terms of technical aspects like cinematography, set design and overall shot taking or sheer acting department, Bengaloored gives a sense of a film being made as a film school assignment rather than something which looked at any commercial gains. There are songs in the film and as per the requirement of the script they run in the background. However there is nothing much to write home about here either.

There are a few scenes in the film that do bring on a smile though. Innocent interactions between Harish and Meghana, especially during the start of their film, are sensitively shot. Also, Harish's realisation that he is truly in love with Meghana is shown well too. However on the flipside, the entire episode featuring a drunkard author is a total put off. Same is the case with the Godman episode which gets into heavy sermonising. The relationship between Harish and his dad is quite confusing as well and only makes one fathom what the young man really wanted here.

There are films which are offbeat and hence one has to see them with the right mindset. However Bengaloored is not just offbeat, it is also hugely metaphorical in its treatment at not one, not two but a several points in the narrative that mars the interest level of the audience. Not just that, it also drags at multiple points, whether in its pauses, long drawn scenes, never ending dialogues or numerous philosophical references. Till a point of time all of this can still be digested but beyond a limit, as happens in case of Bengaloored, one just feels alienated from the film.

Bengaloored comes in an ordinary plastic packaging with a cover design that doesn't give any idea whatsoever of what the film is all about.

The film's duration is 110 minutes

Really, this film is made for a very very very niche audience and even for that segment which revels on decoding art house cinema, Bengaloored could be quite an ordeal to sit through in entirety. Watch it only if you want to support independent makers in their endeavour to make something different. However don't expect any entertainment value out of this film.

Amul nails it once more with their…