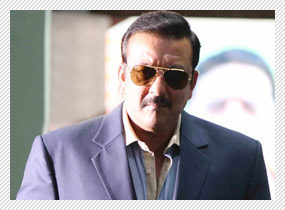 Sanjay Dutt plans on doing all the stunts in producer TP Aggarwal's next film himself as he wants to experience action. Back in the early '90s, Sanjay Dutt was one of the fittest young men in the industry and even made working-out and having an exercise regimen, popular amongst the youth. A decade later, the actor seems to be going back to those roots as he has decided to perform his own stunts in his upcoming film Policegiri (the remake of 2003 Tamil Hit, Saamy).

Sanjay has even asked producer TP Aggarwal not to hire a body double for him. He feels that body doubles are used to cover up what an actor can't do. "But, I wanted to take a leap and perform the stunts myself to actually feel the state of mind and the adrenaline rush that stuntmen feel. These stunts are physically and mentally challenging and I am ready to take the plunge. Of course, you also need to be mentally prepared for any mishap that may occur," Sanjay says.

Aggarwal on his part feels that Sanjay has worked really hard to achieve a robust body for the film. "Even before we planned to rope in a body double for some of the more serious action stunts, Sanjay firmly said that he would want to execute them himself," says the producer.

The makers were also skeptical about Sanju doing the action sequences, as they require high ground-to-air jumping and gravity-defying moves. "They are scripted to take place at an open ground and not on a set. But not even once did Sanjay show distress and willingly agreed to shoot," adds Aggarwal.

Sanjay will be seen playing the role of a tough cop with a funny side in Policegiri. The film also stars Prachi Desai, who plays the role of a typical girl next door. The film is currently being shot in Hyderabad and will release later this year.