Karan Johar hosted annual bash for the entire industry and everybody turned up in their best couture as they dazzled brighter than stars! Karan and son Yash matched their sherwanis and looked cute! It was interesting to note that Karan's guestlist involved everyone from the established actors to the newbies who will be soon making their debut with Dharma Productions. Kartik Aaryan, Jacqueline Fernandez, Sara Ali Khan, Neha Dhupia, Tara Sutaria were snapped at the bash. Not just them, Bhumi Pednekar, Raveena Tandon, Shraddha Kapoor, Kriti Sanon was also snapped at KJo's home. Soha Ali Khan was there with Kunal Kemmu and so was Kareena Kapoor Khan and Saif Ali Khan. 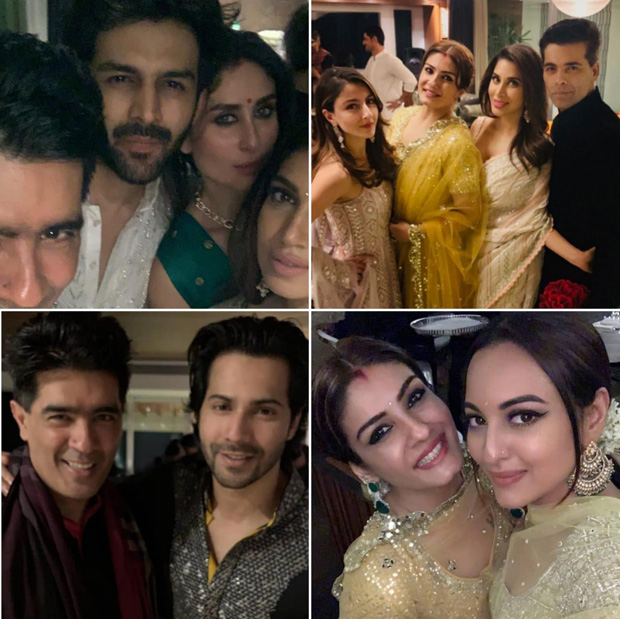 While all the celebs thronged the house, it was Malaika Arora and Arjun Kapoor who made heads turn by making it official. Karan anyway has teased Malaika a lot on National Television about her relationship rumours with Arjun infact he is one of the key players to start the marriage conjecture. Therefore, Malaika and Arjun were the toast of KJo's party. Check out inside pics below.

Karan Johar's Takht, Kalank and Good News are the films which are in spotlight currently. He is gearing up to launch Ananya Panday, Tara Sutaria in Student Of The Year 2. This will be Tiger Shroff's first film with KJo.