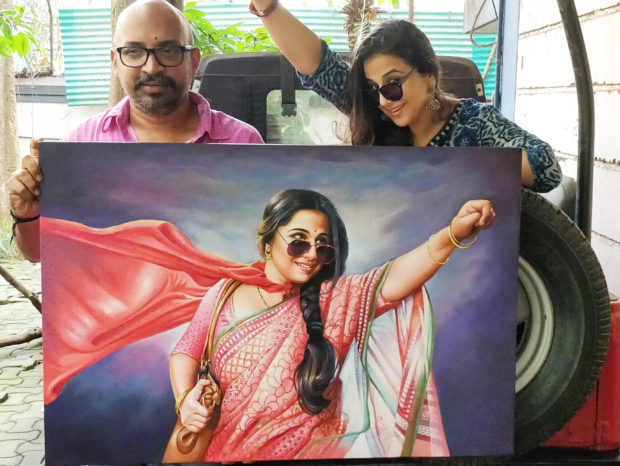 The much talked about poster of Tumhari Sulu has made its way to Vidya Balan’s wall as an oil painting. The image of a happy empowered Sulu (Vidya Balan), raring to go, in a pink sari with a red cape around her neck, has caught the audience fancy, so much so that it even prompted celebrated writer-columnist Twinkle Khanna to tweet to Vidya: “more power to your sari/cape.”

Noted ad filmmaker and director Suresh Triveni got one of Bollywood’s oldest poster artists, Laxman Subhash Jadhav, to make an oil painting of the poster and gifted it to his “favourite actress” to adorn her home wall.

Said Vidya, “Tumhari Sulu has been a wonderful journey to say the least. The character of Sulu is extra special – a curious, fun-loving and enthusiastic housewife who goes from apron to cape. When Suresh gifted me this painting, I was delighted and put it up on my wall almost immediately. It is a treasured gift.”

Said Suresh, “I saw many paintings of Vidya’s earlier film posters at her house. That’s where the greed started. I wanted Sulu to be a part of her wall of fame. I have been dying to work with her for the longest. Doing Tumhari Sulu has been a dream come true.”

Produced by T-Series and Ellipsis Entertainment, Tumhari Sulu comes from the producers of Neerja and Hindi Medium, and releases worldwide on November 24.