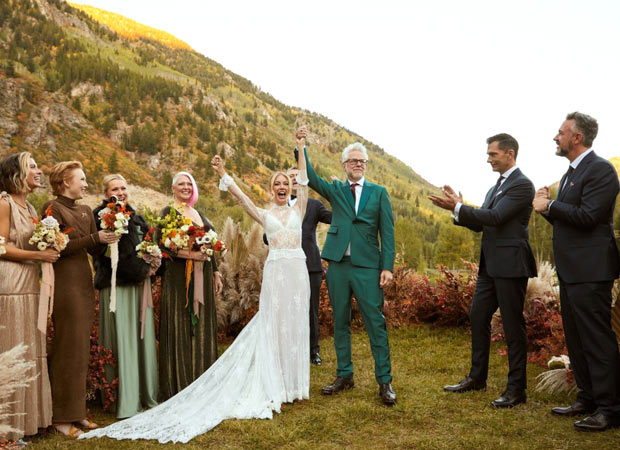 "After over 7 years together, I finally married the love of my life," Gunn wrote in an Instagram post shared Friday. "What an incredible, beautiful, stunning day surrounded by the most wonderful family and friends in the world.” The newlyweds shared beautiful pictures from their wedding celebration that took place at Aspen's Dunbar Ranch.

We got married here in Aspen, Colorado at Dunbar Ranch. A moose interrupted the beginning of the ceremony! For those who don’t know, moose are the most dangerous wild mammals in North America. But the big dude just wandered by. @MatthewLillard yelled out, “It’s James’ Dad!” ????❤️ pic.twitter.com/yz3QEPZACJ

Meanwhile Holland took to her Instagram writing, “James! Thank you for sharing your love, life and family with me. Thank you for choosing me, for elevating me, and for always making me belly laugh. Here’s to many more years to follow the first extraordinary 7.”

The couple had previously worked together in the DC Universe - Holland played Emilia Harcourt in both The Suicide Squad and Peacemaker, which Gunn directed and wrote. According to People, the couple, who were introduced by actor Michael Rosenbaum in 2015, got engaged in February. Holland also appeared in the 2019 superhero horror film Brightburn, which Gunn wrote and produced.

This is Holland's first marriage while a second for James Gunn. He was previously married to The Office star Jenna Fischer from 2000 to 2007, before formally divorcing amicably in 2008. On the work front, Gunn will return with Guardians of the Galaxy Holiday Special this year, and Guardians of the Galaxy vol. 3 in 2023. Jennifer Holland will return in Peacemaker Season 2 which films next year.