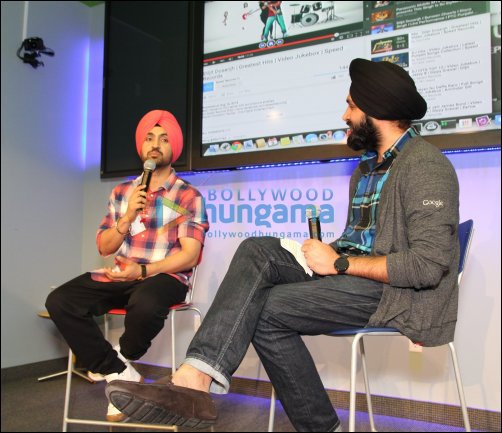 Punjabi superstar Diljit Dosanjh, who is all set to make his Bollywood debut with Udta Punjab, recently created history by being the first Asian celebrity to visit the headquarters of Facebook, Instagram, Twitter, YouTube and Google all in one day.


Diljit, who was recently on a tour to North America, surprised everyone with a completely different kind of expedition - A special social media tour. He not only visited these popular social media outlets but even got to see their day-to-day operations. What makes his tour all the more interesting is the fact that the Punjabi heartthrob did all this in just one day.

Diljit began his tour with the social media giant - Facebook. After an interactive session with the team members behind this innovative social network, he headed to explore the workspace of his favorite networking site - Instagram, where he shared the glimpses of his day with his followers.


Next, on the cards was the Twitter headquarters in downtown San Francisco. He enjoyed an interactive Q&A session with the employees of Twitter and also spoke about his North American tour and upcoming concerts in Michigan, California, Texas and New Jersey. One particular employee even wrote a poem for Diljit and recited it to him.


Post Twitter, Diljit's next destination was YouTube headquarters in San Bruno. Here, Diljit had a great learning experience wherein he was introduced to a new tool and other nitty-gritty of the social media and he even shared a snapshot of them.


The actor's social media tour was concluded at the Google headquarters in Mountain View. The Google visit was equally fun as the others. Diljit sang for the team members and took a group selfie with everyone there.