The much anticipated Sanjay Leela Bhansali directorial Gangubai Kathiawadi finally has its worldwide theatrical release on 25th February 2022. The film starring Alia Bhatt in the titular role has been receiving an immense amount of love and appreciation from the audiences and critics alike. It has also been doing quite well at the box office. 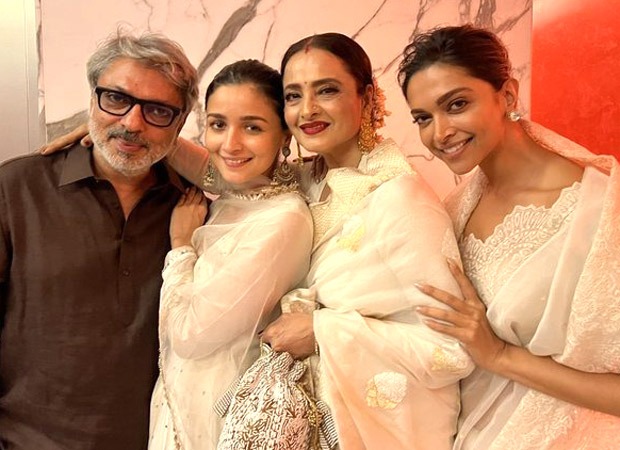 Ahead of the film's release, a special screening was organised for the Bollywood celebrities. The screening was a star-studded event and was graced by various big personalities of B-Town. Recently, an unseen photo from the screening featuring Deepika Padukone, Rekha and Alia in the same frame with Sanjay Leela Bhansali has surfaced on social media. In the picture, all three gorgeous ladies are dressed in white and the picture is bound to go viral.

The picture has been shared by Sudeep Chatterjee, the cinematographer of Gangubai Kathiawadi on his social media handle. Sharing the picture, Sudeep wrote, "Happiness #GangubaiKathiawadi". Meanwhile, after the screening, Rekha was left in tears seeing Alia's performance. An eye witness from the screening revealed, "Rekha M’aam just couldn’t believe the performance that she saw. After the show she rushed weeping to hug Alia".