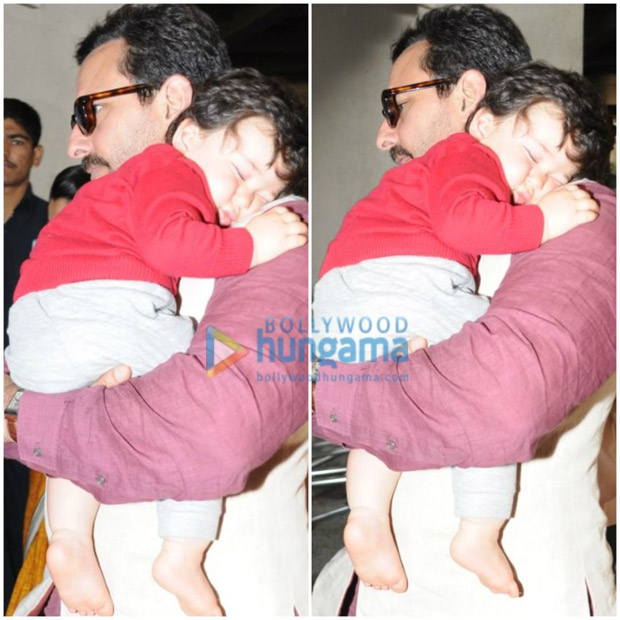 The royal baby of Saif Ali Khan and Kareena Kapoor is gaining all the attention on social media as well as real life. Taimur Ali Khan just turned a year older and if the pictures of the private bash are anything to go by, then we had to say that he is the apple of the families’ eyes. After Taimur’s first birthday celebration at the Pataudi palace, Saif Ali Khan and Kareena Kapoor Khan returned to Mumbai last night along with their little tot.

Capturing the moment were several media personal who were stationed at the airport awaiting the arrival of the trio and yet again Taimur Ali Khan became the cynosure of their camera lenses. While Saif and Kareena are quite camera friendly and calmly walked down the aisle towards the parking area, it seems that Taimur too has become quite comfortable amidst all the cameras. We hear that the kid was wide awake when he landed in Mumbai but we also came across pictures of the toddler enjoying a blissful sleep despite the noise surrounded by him.

We came across this video of Taimur Ali Khan enjoying his nap time in spite of the chaotic nature around him as the media tried to capture a glimpse of the celebrity kid. On the other hand, when we came across this picture of Taimur sleeping we just had one word – heart-warming.

With Saif, Kareena and Taimur returning to their hometown city Mumbai, we hear that the trio will next take off to Europe to ring in the New Year. However, they are maintaining silence on the actual destination they will be holidaying in. Interestingly, Switzerland and London are the couple’s favourite destinations in the continent.

As for the birthday bash of Taimur, we hear that the little tot was pampered by not only his parents but his grandparents, aunt and the rest of the family members. The Kapoors too had taken off to Pataudi to ring in Taimur’s birthday and Karisma took to Instagram to share several pictures of the same.