As so many others I know often say, “Just one song, ‘Hawa Hawaai’ from Mr India showed what a talent Sridevi is.” And so far as her talent is concerned, the “is” will remain for all time.

Sridevi was among the last of the select heroines of all time who lip-synched more than a half-a-dozen songs that are considered cult. And, uniquely, every such song denoted a key phase in her career in Hindi cinema. Never mind if her first Hindi film as a child artiste (Julie) was a music-fest with none of the hit songs filmed on her, or that her debut Hindi film Solva Sawan (1978) was a non-starter and had no popular song. 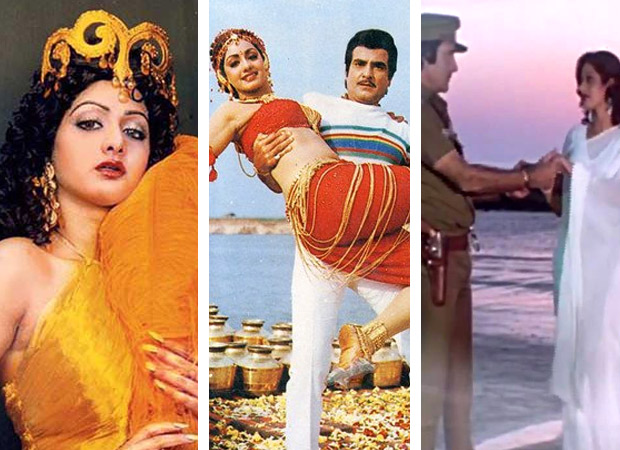 ‘Naino mein sapna’ (Himmatwala)
With this song, Sridevi literally thundered into Hindi cinema in 1983. Bappi Lahiri - Indeevar created a sensational number (sung by Lata Mangeshkar with Kishore Kumar for Jeetendra) whose vigorous ‘picturization’ set a new and lasting trend of huge props (from pillars to balls or clay-pots) and lots of junior artistes as chorus in a romantic duet.

With this song, Sridevi was christened “Thunder Thighs” by the industry, and for at least three years after that, despite doing a few classy movies like Sadma and Jaag Utha Insan that did not fare well, she was typecast by the industry in that image. This was true despite her being among the very few young heroines who were considered saleable on her own, without any hero, in the years to come.

When the jubilee hit was rehashed in 2012, this song was re-created for the film by composers Sajid-Wajid and filmed on Tamanaah Bhatia, who played her role.

‘Ooee amma ooee amma’ (Mawaali)
Mawaali was Sri’s last release in 1983, and by then she had done two more films before it with Jeetendra.

But Mawaali was the next big hit in the same mould, which came to be known as the Padmalaya (the Chennai production banner) brand of ‘product’, containing similar kinds of songs, mostly sung by Kishore Kumar with Asha Bhosle. Bappi Lahiri - Indeevar created another cult number, which was panned for his audiovisual ‘cheapness’ then, but went on to defy time. This film consolidated the Jeetendra - Sridevi team.

In 2011, it was re-created with modifications by Vishal-Shekhar as ‘Ooh la la’ in Jeetendra’s home production The Dirty Picture, the disguised bio-pic of South siren Silk Smitha. The duo got Bappi Lahiri himself with Shreya Ghoshal to sing the song, which became yet another chartbuster!

‘Har kisiko nahin milta’ (Janbaaz) and ‘Main tera dushmun’ (Nagina)
In 1986, Sridevi truly broke through as a Mumbai heroine with her superlative cameo in Feroz Khan’s Janbaaz besides the leads in Subhash Ghai’s Karma and Harmesh Malhotra’s Nagina. That she had life beyond being a thunder-thighs maiden, and could do better than just enacting such songs with her quicksilver expressions, was clear when these Mumbai filmmakers cast her in completely different moulds.

Kalyanji-Anandji-Indeevar’s ‘Har kisiko nahin milta’ (sung by Sadhana Sargam) from the former film and Laxmikant-Pyarelal-Anand Bakshi’s ‘Main tera dushmun’(Nagina) sung by Lata Mangeshkar were the first two hugely popular songs filmed on her, which represented her evolution and full-fledged acceptance in Mumbai-made Hindi cinema. It was a decisive high jump to the Numero Uno position. 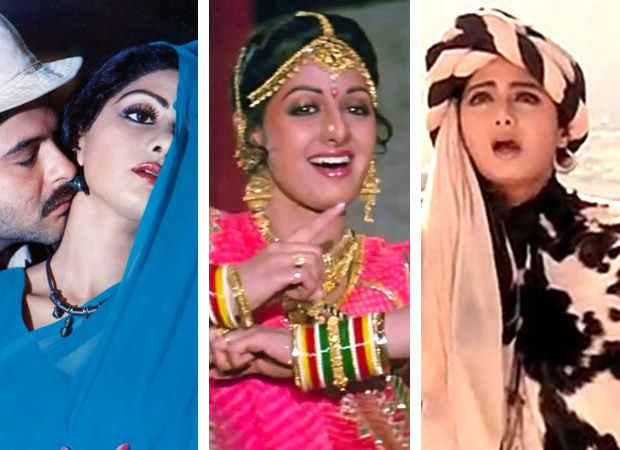 ‘Hawa hawaai’ (Mr India)
This is generally considered the ultimate Sridevi song, for in its tight 7- minute duration, it encapsulated her entire chameleonic persona and exposed her phenomenal talent at expressions and body language. That Laxmikant-Pyarelal, Javed Akhtar and Kavita Krishnamurthi had an unusually hilarious ball of a time during its creation and recording, complete with spontaneous ad-libbing, helped make it what it was, but it was clear that the song could be fashioned this way only because there was a humongous talent like Sridevi to lip-sync it. In 2017, it was used in original form for a celebration sequence in Tumhari Sulu.

‘Kaate nahin kat-te’ (Mr India)
Still considered the benchmark seduction song, this Kishore Kumar-Alisha Chinoy song linked Sridevi to a classier brand of erotica vis-à-vis her Padmalaya gyrations. This milestone 1987 entertainer brought her in close contact with future husband Boney Kapoor. Time and again, since sequels began to work, there has been talk of Mr India 2, but that will never happen now, for despite the title, it was Sridevi who was as important to the film as hero and brother-in-law Anil Kapoor!

‘Mere haathon mein nau nau chudiyaan hai’ (Chandni)
Lata Mangeshkar’s Shiv-Hari-composed hit written by Anand Bakshi was another milestone in a Sridevi milestone, Chandni (1989). The folksy chartbuster completed the establishment of Sridevi as a pan-Indian face dancing to a North Indian wedding song. This time, she had Rishi Kapoor and Vinod Khanna as heroes, it was her first movie shot abroad, and she became the quintessential romantic Yash Chopra heroine as the filmmaker rediscovered himself (and how!) after a chain of flops in the 1980s. In one masterly romantic stroke, the filmmaker had used the biggest sensation of the ‘80s to design his own comeback!

‘Naam mera prem kali’ (Chaalbaaz)
Laxmikant-Pyarelal had by then chosen Kavita Krishnamurthi Subramaniam’s voice as the prime vocalist for Sridevi. Besides the common Southern origins and tenor, Kavita’s versatility as singer matched that of the superstar. The song was written again by Anand Bakshi. Yes, Sri was a superstar by now, and had worked with Amitabh Bachchan, Anil Kapoor, Jackie Shroff as well as Sunny Deol here and was shooting films with Dharmendra and Govinda.

Chaalbaaz (1989) was a milestone among double-role dramas and it was an award-winning performance on par with Dilip Kumar’s in Ram Aur Shyam and Hema Malini’s in Seeta Aur Geeta.

‘Morni baaga ma bole aadhi raat maa’ (Lamhe)
Another ace from Yash Chopra, Shiv-Hari, Anand Bakshi and Lata Mangeshkar, this haunting folk melody (with Ila Arun as co-singer) from Lamhe (1991) had Sridevi demonstrating her expertise at a Rajasthani folk number. Sridevi had always been a dancer par excellence and had shown her range even in this art, and in this film she also dazzled in her mother and daughter double role.

‘Tu na jaa mere badshah’ (Khuda Gawah)
Maybe at a popular level, this song did rank a shade lower than the rest, but where this Alka Yagnik song (a duet with Mohammed Aziz singing for Amitabh Bachchan, also the ghost producer of this 1992 film) composed by Laxmikant-Pyarelal and written by Anand Bakshi scored was in its unusual musical phrasing with the touch of Afghani music.

And this quality of subtle intensity helped Sridevi enact this song with unmatched emotions in expressions and body language, imparting a rare pathos to the poignant song on parting. Almost 25 years since, the song looms tall in the all-elegant music score.

Also Read: Veteran actress Sridevi passed away due to cardiac arrest in Dubai