The makers of Chhalaang released the first poster of the movie and we already feel that the caricature that it is, is going to garner all the love from all across. From the looks of it, Nushrat Bharucha and Rajkumar Rao are in a very different role. While the actor is winning us in a red attire already with his sleepy avatar, Nushrat is definitely in a sports movie that is bringing the comedy along. 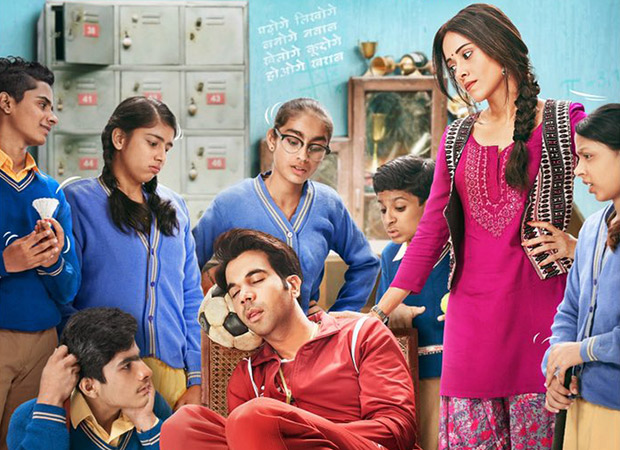 In the poster, we can see how Rajkummar Rao is dozing off on a chair while the children around him along with Nushrat Bharucha are gazing at him. There is a hockey kit and a shuttle in the backdrop.

Chhalaang is a hilarious yet inspirational journey of a PT Master from a semi government-funded school in Northern India. Montu (Rajkummar Rao) is a typical PT Master for whom it’s just a job. When circumstances put everything that Montu cares for at stake, including Neelu, being played by Nushrat Bharuch who he loves, Montu is forced to do what he has never done - Teach.

Through Montu’s journey, Chhalaang humorously addresses the value of Sports Education in the school curriculum. The poster is here and we absolutely are loving how the story will unfold with the coming time.

Chhalaang, a social comedy stars Rajkummar Rao and Nushrat Bharucha in lead roles. Directed By Hansal Mehta, Written By Luv Ranjan, Aseem Arrora & Zeishan Quadri, Chhalaang is produced By Ajay Devgn, Luv Ranjan and Ankur Garg where the story is written by Luv Ranjan. The film is all set to release by 13th March 2020.