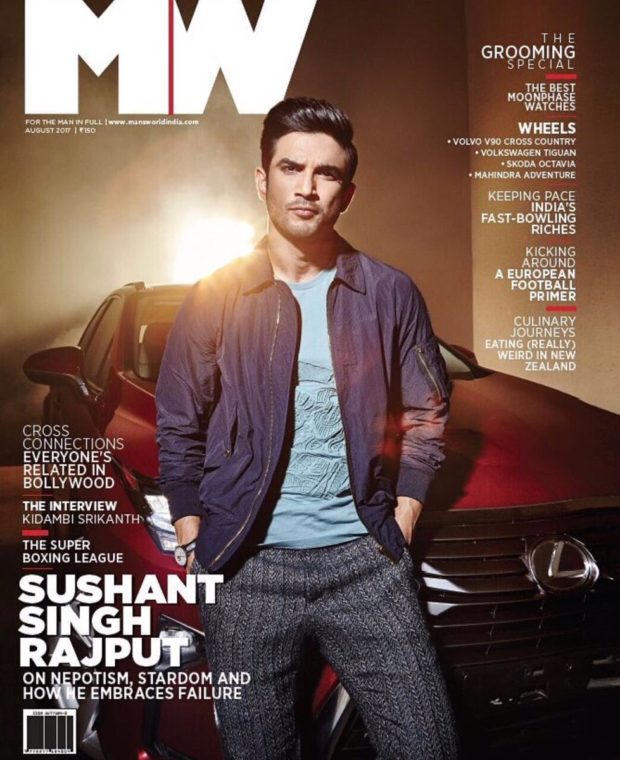 Sushant Singh Rajput may have given a flop with Raabta but that is not stopping him to hustle hard. The actor is upping his style quotient on the August issue of Man's World magazine. In the latest issue, Sushant Singh Rajput talks about the existing nepotism in the industry, stardom and embracing failure.

Sushant Singh Rajput shared the cover and captioned it, "Ignored decibels!! On the cover of @mw_india August issue. Grab your copy now!!"

In a candid interview with the magazine, Sushant Singh Rajput admits that one can't deny the existence of nepotism in the industry. But, that has never come in his way. He believes he has been given great opportunities and has done films he wanted to do.

Speaking about failing with Raabta at the box office, Sushant Singh Rajput said that the failure did not bother him much. He is fine with failing again and again. He thinks that everyone has become too cautious and careful when it comes to taking risks. Sushant further added that he loves to try new things and that is his high. He said that no matter what happens on a Friday, he is mentally back excited to be at work on Monday.

Furthermore, Sushant Singh Rajput talks about all the relationship rumours surrounding him. Although Sushant has not admitted being in a relationship with Kriti Sanon, the speculations around their rumoured relationship have been strong since they starred in Raabta. Speaking about the same, Sushant admitted that he has been very transparent about his relationship in the past. He added that last year he was dating someone (TV actress Ankita Lokhande) and this year he is not. So, Sushant said there is nothing to confirm about it.

As far as work is concerned, Sushant Singh Rajput is currently prepping for Chandamama Door Ke in which will be starring as an astronaut. The film will also star R Madhavan.