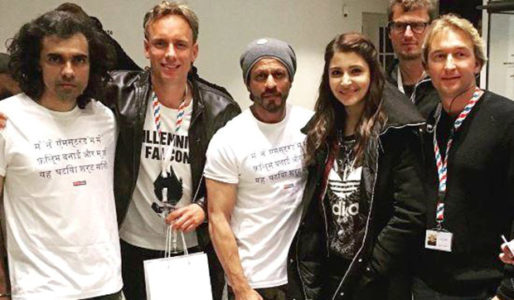 We had reported that after wrapping up Prague schedule, Shah Rukh Khan and Anushka Sharma had started their shooting for their film The Ring in Amsterdam. Since the shoot commenced, the duo has been sharing quite a lot of videos and photos of their fun times on the sets of the film.

The cast and team of The Ring have now wrapped their Amsterdam schedule. After the wrap up, New Amsterdam Film Company met the team to felicitate them and told them how honoured they were to have them in Amsterdam. Sharing a photo, they wrote, "We truly had a blast the last two weeks with these superstars from India. Many thanks to @iamsrk, @anushkasharma, director Imtiaz Ali and the whole @redchilliesent crew for your devotion, energy, and the wonderful collaboration. It was an honor having you and we'll miss you in Amsterdam! #newamslineproduction #thering #redchilliesentertainment #bollywood #setlife."

What's funny was the fact that Shah Rukh Khan and Imtiaz Ali wore quirky T-shirts. The quote on the T-shirt read, "Maine Amsterdam mein film banaye aur badle mein mujhe yeh ghatiya t-shirt mili. (I made a movie in Amsterdam and in return I got this lousy t-shirt.)"

The celebration didn't end there. Shah Rukh Khan shared a video on Instagram with a caption that read, "Thank u AMS & Amsterdam for such a wonderful schedule. Ur production does what nobody else can...#love Amsterdam."

Directed by Imtiaz Ali, The Ring is scheduled to for next year release.