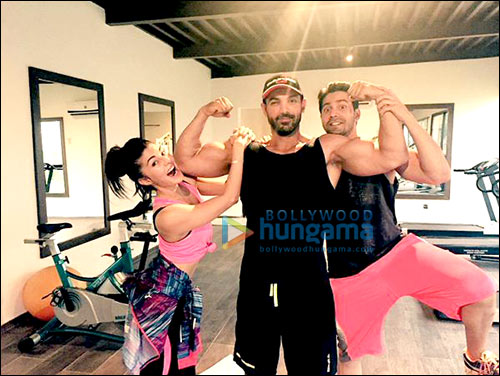 While fans are eagerly waiting to see two hot hunks coming together in the upcoming film Dishoom, John Abraham and Varun Dhawan seem to have developed a bond of sorts during the shoot of the film. Also, having fun with the duo is Jacqueline Fernandez who is playing the leading lady in the film.


Earlier we had reported about how Varun Dhawan was posting pictures while travelling to Brazil to complete the shoot schedule of the film. Now, the actor has once again taken to Twitter to share a picture with his co-stars. Varun posted a picture with John and Jacqueline post a workout session saying, "Just finished doing the insanity workout with @Asli_Jacqueline but for some reason @TheJohnAbraham got pumped."


Produced by Sajid Nadiadwala, Dishoom is directed by Rohit Dhawan.