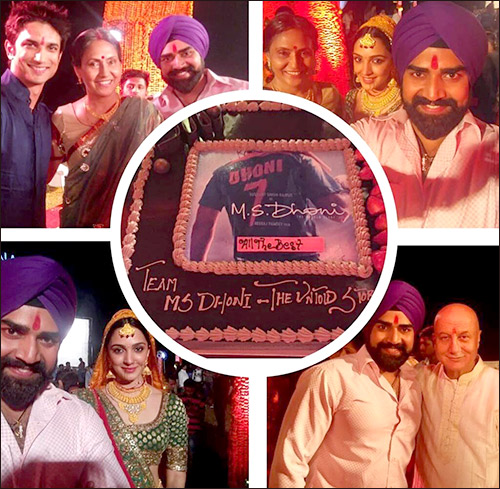 Known to be one of the best cricketers and also the captain of the Indian cricket team, Mahendra Singh Dhoni's life is now being captured on celluloid by the Special 26 fame director Neeraj Pandey in M. S. Dhoni - The Untold Story. The film which is currently being shot in varied real locations reached a major point wherein the entire team shot for the marriage sequence of Dhoni and his now wife Sakshi.


While Sushant Singh Rajput plays Dhoni, Kiara Advani plays his wife in the film and the marriage was shot in a rather similar fashion compared to the real one. The cricketer tied the knot with his girlfriend in 2010 and the entire set including the outfits of Sushant and Kiara were recreated in a manner that resembles the off screen wedding of Dhoni and Sakshi. Anupam Kher plays the father of Dhoni in the film.


M S Dhoni - The Untold Story promises to reveal some intriguing aspects of the cricketer's life including her personal memoires. Produced by Fox Star Studios, the film is slated to release on September 2, 2016.