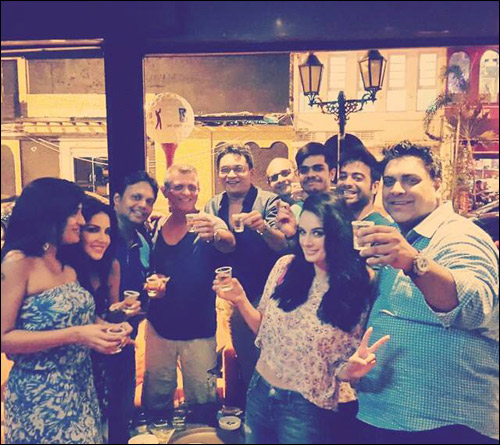 While we all were well aware of the fact that Sunny Leone is all set to romance Ram Kapoor in their next titled Kuch Kuch Locha Hai, we have come to know that yet another actress will be playing a prominent role in the film. After Yeh Jawaani Hai Deewani and Yaariyan, Evelyn Sharma will now be seen sharing screen space with film's female lead Sunny Leone.


In fact, the actress is thrilled about being a part of the film and the trio, Evelyn, Sunny and Ram are currently having a blast in Malaysia, shooting for Kuch Kuch Locha Hai. Recently, Evelyn even posted a picture of her partying with the film's crew, director Devang Dholakia and her co-stars Sunny Leone and Ram Kapoor on her twitter handle. Talking about the moment, Evelyn wrote, "Crazy night out with my new movie gang! #KKLH #Malaysia @SunnyLeone @devang23 @RamKapoor @faridamiri2 @yofrankay." Sunny Leone too wrote on her Twitter handle about shooting with them saying, "Had a great time with crew from"Kuch Kuch Locha Hain" tonight @devang23 @RamKapoor @faridamiri2 @yofrankay @evelyn_sharma :) good times."


Initially, Kuch Kuch Locha Hai was titled Patel Rap but later, due to reasons unknown, the title was changed. This family comic entertainer will have Ram playing the role of Gujarati businessman settled in Kuala Lumpur while Sunny Leone will play the role of a glamorous film star. However, the details of Evelyn's role in the film are yet to be revealed.