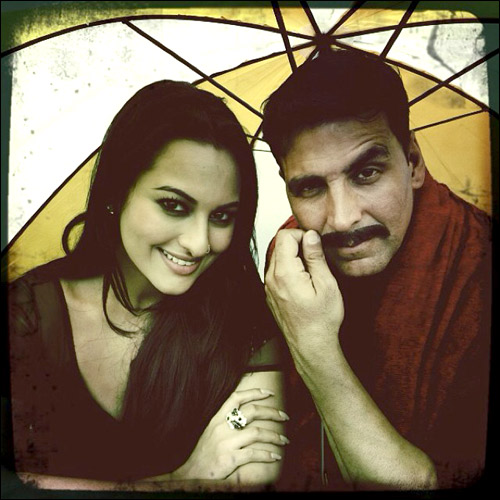 It's a well known fact that Sonakshi Sinha shares a great rapport with co-star Akshay Kumar and the actress has acted with the action star in about four films and even done special appearances in some of his films. With Akshay Kumar turning a year older today, Sonakshi Sinha did not miss out on it and wished him on the micro blogging site.


Despite her busy schedule, Sonakshi Sinha took to Twitter to post the birthday wishes and wrote, "Happppppy Birrrrrthday Rowdy Rathore @akshaykumar!!" After her Bollywood debut Dabangg, Rowdy Rathore with Akshay Kumar was Sonakshi's second film and that too managed to break a record of sorts by entering the 100 crore club. Reminiscing those days, Sonakshi Sinha even posted a picture of Akshay Kumar in the 'Rowdy Rathore' look.


Last seen in Holiday: A Soldier Is Never Off Duty, Sonakshi Sinha is currently busy with her next film with Ajay Devgn titled Action Jackson and the Arjun Kapoor starrer Tevar. Apart from this, Sonakshi has signed up a woman oriented film with A R Murugadoss in association with Fox Star Studios. She will also be making her Tamil debut soon with Rajinikanth starrer Lingaa.


On the other hand, after two releases this year, Akshay Kumar is currently shooting for The Shaukeens, a remake of the 80s classic and he has even wrapped up the shoot of Sanjay Leela Bhansali's Gabbar. Apart from that he will be seen with Sidharth Malhotra in Karan Johar's Brothers and Neeraj Pandey's Baby.