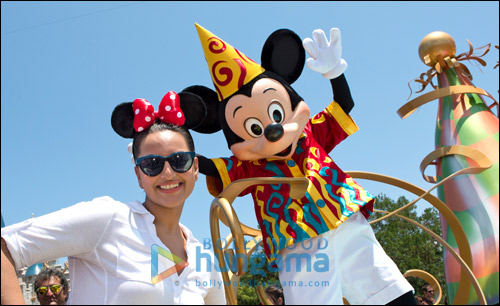 Sonakshi Sinha, often known for her desi avatars in films, is still a kid when it comes to her love for Disney cartoons. It is a renowned fact that many Bollywood celebrities have grown up with these animated characters and actresses like Sonam Kapoor have time and again expressed their love for them.


Now that our favourite Disney character Mickey Mouse turns a year older, Sonakshi Sinha not only gave her best wishes to Mickey but also explained the importance of the character in her life. The actress said, "I think Mickey Mouse has played a very important role in most generations formative years! For most people, Mickey Mouse is Disney. The entertainment, the smiles and the laughter that Mickey and his friends have given us will continue for generations to come as well, and on his birthday, I'd like to wish him and thank him for all the wonderful memories!"


Sonakshi Sinha is currently busy with the promotions of her upcoming film Action Jackson which stars Ajay Devgn and Yaami Gautam. The actress will also be seen with Rajinikanth in her Tamil debut Lingaa and she will also start shooting for the untitled action film, directed by A R Murugadoss from February 2015.