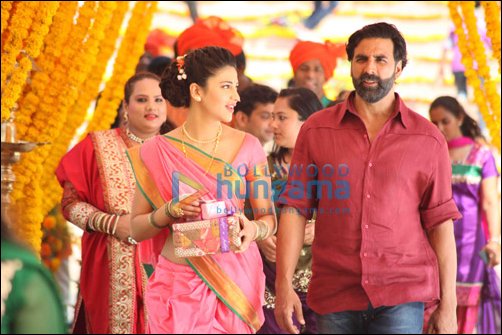 Post the success of Baby, all eyes have been on Akshay Kumar's next venture Gabbar is Back. Though a lot has been said and seen in the past few days, the makers of the film have released an image of Shruti Haasan from the film.

As mentioned earlier Shruti will be seen playing a Maharashtrian character for the very first time and surely she does look like one in this traditional attire of a nauvari saree in a nice pink color, wearing a Nathani nose ring and in the traditional vibrant color. But an interesting fact that very few know is that Shruti's mother Sarika is half Maharashtrian, so now we know from where she is getting these looks from.

Gabbar is Back that is produced by Sanjay Leela Bhansali in association with Viacom 18 and directed by Krish, is the remake of popular Tamil blockbuster Ramanaa. The film also stars Amala Paul, Prakash Raj, Sonu Sood, Kareena Kapoor Khan in a cameo among others and is slated to release on May 1, 2015.