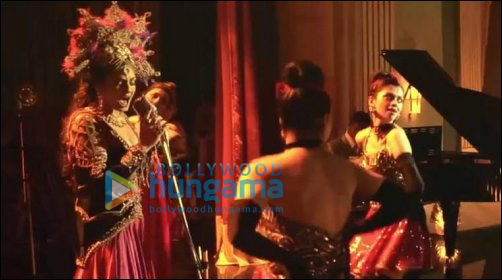 After Anushka Sharma and Ranbir Kapoor, it is time for the 90s diva Raveena Tandon to don the retro look for the upcoming Anurag Kashyap film Bombay Velvet. Just like

the sets of the film, the costumes of the actors too seem to be equally rich and elegant.


Raveena Tandon will be playing a senior jazz singer in the film and her look in the film has been designed by Swapnil Shinde, who also designed Anushka Sharma's look. And if you think Anushka's

look was glamorous, just wait till you see Raveena in this never-before-seen avatar. Sporting a lavish costume filled with sequins and embroidery and an elaborate headgear, Raveena is seen singing

on stage of a club, accompanied by background dancers.


There were rumours initially mentioning the exit of the actress from the film since the makers decided to chop off her role. However, the actress had soon clarified that the film had her in a

miniscule role and it was just a friendly appearance.


Starring Karan Johar as the villain, Bombay Velvet has been extensively shot in Sri Lanka and is slated to release on May 15, 2015.