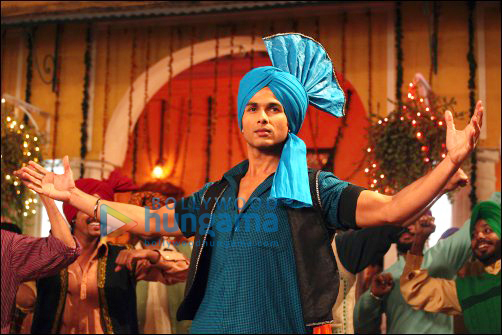 Shahid Kapoor is dressed up like a complete Punjabi munda in the song 'Saj Dhaj Ke' from his forthcoming film Mausam. 'Saj Dhaj Ke' is a fast paced feel good song with Punjabi beats. The music of the song is composed by Pritam and it is sung by Mika. In the video for the song, Shahid Kapoor shows off his Punjabi moves and flair as he tries to impress his love Sonam Kapoor. The song has a full on Punjabi vibe in a sangeet like set up.

Shahid is seen wearing a blue checked half sleeve kurta with a black sleeveless jacket. He is also seen sporting a blue 'pagg' (turban) and a silver kara. Shahid's styling and the set up of the song is very similar to his 'Nagada Nagada' track in Jab We Met. It is said that director Pankaj Kapoor decided to give his son a similar appearance in 'Saj Dhaj Ke' keeping in mind the actor's popularity in Jab We Met.

Mika Singh reveals how he deals with social…

The Kapil Sharma Show: Singer Mika and the…