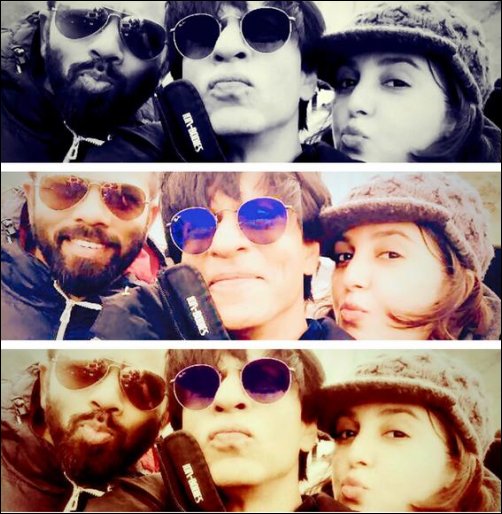 Shah Rukh Khan shares a great rapport with some of the most prominent filmmakers in Bollywood and this is no secret. The actor, who has had a rather rocky relationship with his best friend Farah Khan, recently was enjoying his outdoor schedule with the choreographer turned filmmaker during the shoot of his upcoming film.


Shah Rukh Khan is currently in Iceland shooting with Kajol and the rest of the cast and crew of Rohit Shetty's directorial Dilwale. The superstar took to Twitter to share a selfie he clicked with the director of his film, Rohit Shetty and his best friend and choreographer of the film, Farah Khan. The actor also posted a caption saying, "Mere agal bagal...Filmon ki jaan...Rohit Shetty aur Farah Khan." Interestingly, just a day or two ago, Shah Rukh Khan also put up a picture with Kajol's mother and veteran actress Tanuja since she too has accompanied her daughter for the shoot.


Produced by Red Chillies Entertainment in association with Rohit Shetty, Dilwale also stars Varun Dhawan, Kriti Sanon, Vinod Khanna, Varun Sharma, and Sanjay Mishra among others and is slated to release on December 18.