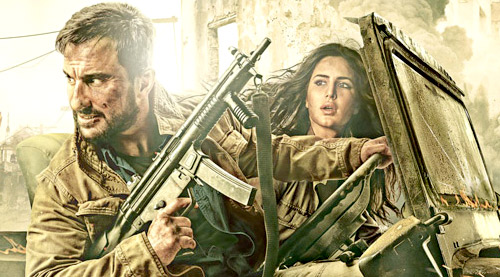 1. The film addresses the thorny issue of cross-border terrorism. An issue that has acquired renewed relevance in the light of India's anti- Hurriyat stand.


2. The political thriller is based on Hussain Zaidi's novel Mumbai Avengers which imagines a bunch of RAW agents breaking into Pakistan to punish the perpetrators of 26/11. With Pakistan in the denial mode this could be the wake-up call for Indian audiences dulled into a soporific sense of bonhomie by Bajrangi Bhaijaan.


3. Unlike Saif-Kareena or Salman-Katrina, Saif Ali Khan and Katrina Kaif is a virgin pair. Audiences like the thought of seeing together a pair on screen that they are unlikely to see happen in real life.


4. Katrina has been missing from screen since the appalling Bang Bang. Boom, Dhoom, Bang Bang What's with all these onomatopoeic titles, Katrina? She returns to an action role again after Dhoom and Bang Bang. Looks like someone somewhere has released the violent side of her personality.


5. Producer Sajid Nadiadwala had an impeccable and enviable track-record last year of cent-percent success with all his productions. This guy means business.


6. Phantom has been shot in some of the most rugged locations of this earth, including Beirut where bombs go off every once in a while. No, that bomb going off isn't Katrina performing an item song.


7. Like Baby, that other striking anti-terrorism political thriller this year Phantom has no lip-sync songs. No item songs. No song breaks. No comic relief. Phantom is likely to be the box office Baby of the second-half of 2015.


10. Kabir Khan is now a member of the super-elite Rs 350-crore club. Anything he touches will be presumed to be gold.