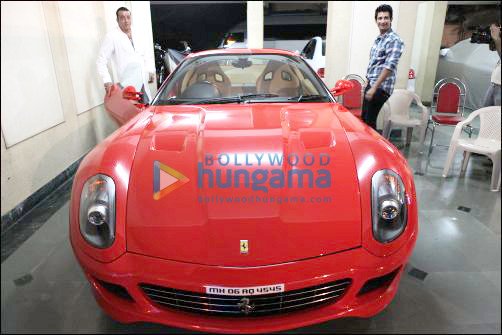 Vidhu Vinod Chopra's production Ferrari Ki Sawari starring Sharman Joshi is one of the most awaited films. Sharman was required to take Ferrari driving lessons for the film. Sanjay Dutt who is a proud owner of a red Ferrari is now giving Sharman driving lessons.

Vidhu, who is very close to Sanjay Dutt requested him to teach Sharman to drive the red beauty instead of going for a professional teacher.

Dutt, who is teaching Sharman driving lessons in his own Ferrari, is now also sharing his car with him. Sources say, "Sanju took the responsibility of teaching Sharman to drive his own Ferrari for the film. Sharman turned out to be a good student and noticing his interest and love towards riding the vehicle, Sanjay has now given an open invitation to Sharman to use his Ferrari whenever he wants, at any time of the day."

Sharman needs to master the skill of driving the Ferrari by the end of this month. To practice more and more and to perfect his driving skills, Sanjay Dutt has asked Sharman to use his Ferrari whenever he wants to practice or take it for a drive.

Sixty percent of the shoot is over and now mainly all the scenes with the Ferrari are left to be shot. We will soon see Sharman in a sparkling red Ferrari driving across the streets of Mumbai.

Director Rajesh Mapuskar says, "Vinod sir is extremely close to Sanjay and he spoke to him about teaching Sharman in his Ferrari. We have completed 60% of the shoot and now the rest of the portions are with Sharman and the Ferrari."

Ferrari Ki Sawari is expected to release in April 2012.