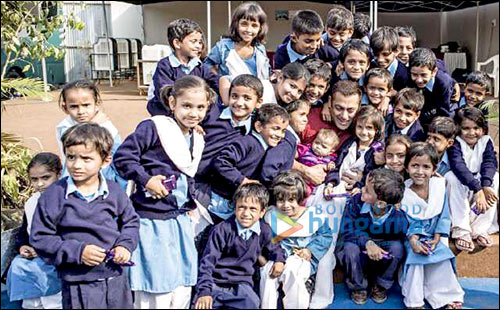 Just a couple of days back Salman Khan was spotted talking to and interacting with street kids outside Olive, a popular suburban joint in Mumbai. Well the actor, who is currently shooting for his next venture Sultan, recently shot with a group of kids for the film.


Tweeting an image from the sets of the film, Salman posted, "Sets of 'Sultan'. Shot with these kids". The actor, who has been training hard for the film in which he plays a wrestler, is seen sporting a kurta while holding a small kid in his arms while the others dressed in school uniform crowd around him happily for the photograph.


Produced by Yash Raj Films and directed by Ali Abbas Zafar, Sultan features Anushka Sharma alongside Salman and it is slated for release this Eid.