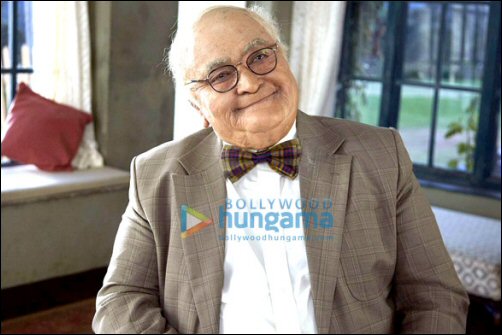 Yesterday, the veteran actor Rishi Kapoor tweeted that "Kapoor& Sons. My first look out tomorrow. Will post first thing in the morning. Await!!!!!" Proving that he is a man of

his word, today morning, he treated his 'followers' with an old man look (that almost has him unrecognisable) with the apt caption "Kapoor & Sons. First look of mine in the film. Others to follow.

It's really nice to see that even at this age; Rishi Kapoor is not at all shying away from experimenting with his looks. Readers may also know that, Rishi Kapoor is playing an 80 year old man again

in Divya Bhushan Kumar's Sanam Re that stars Pulkit Samrat and Yami Gautam.

While Kapoor & Sons stars Sidharth Malhotra, Fawad Khan and Alia Bhatt, the film is being by Shakun Batra and produced by Karan Johar under his banner Dharma Productions. The film is slated