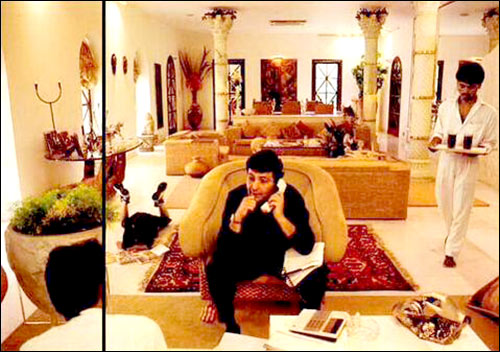 It seems that Rishi Kapoor's new found love is Twitter and he keeps sharing anecdotes and memories, spreading a sense of nostalgia on the micro blogging site. While he voiced out his opinion fearlessly on the ongoing issue of beef ban on his Twitter handle, now, the actor posted a picture of Ranbir Kapoor from his childhood days.

The picture shared by Rishi Kapoor, has the actor busy talking on the phone but what grabs your attention is a kid lying on the floor surrounded by comics. Talking about the picture, Rishi tweeted, "What is unique in this picture? In my living room, on the left side on the floor,vis a young Ranbir reading comics." While we are aware of a complete suave and charming avatar of Ranbir Kapoor, the veteran star gave us a glimpse of one of the unique sides of the young Kapoor lad's personality.

Ranbir Kapoor is currently busy shooting for Imitiaz Ali's Tamasha and will later continue shooting for Anurag Basu's Jagga Jasoos. Before that, he will probably be back in town to promote his upcoming period drama Bombay Velvet.