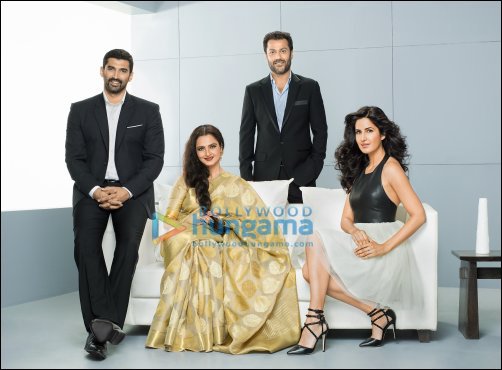 UTV Motion Pictures announced a scintillating star cast for Fitoor which includes Katrina Kaif, Aditya Roy Kapur and the eternal beauty Rekha. Fitoor, an adaptation of Charles Dickens' classic, 'Great Expectations' is the passionate love saga of a young artist Noor, played by Aditya Roy Kapur, and a beautiful heart breaker Firdaus, essayed by Katrina. Rekha plays the role of the mercurial Begum, who is the catalyst in this tempestuous love saga that spans decades and continents.

Check out: Rekha, Katrina and Aditya in Fitoor

In keeping with its setting, the movie is going to be shot across many locations in North India including Kashmir and Delhi, as well as an international destination.

The film is scripted by Supratik Sen and Abhishek Kapoor, and will be produced by UTV Motion Pictures in association with Guy in the Sky Pictures. It is scheduled to go on the floors in August 2014 and will be directed by Abhishek Kapoor.