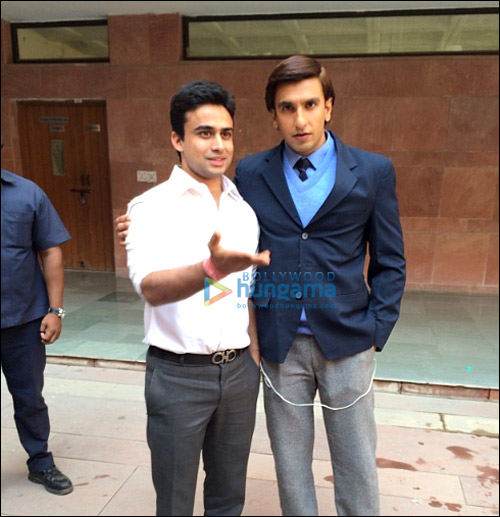 Ranveer Singh, who made his debut with Band Baaja Baaraat, has been on an upswing ever since. With his latest release Ram-Leela entering the Rs. 100 crore club, he seems to be virtually unstoppable. In fact, Ranveer who will next be seen in Gunday, is already working on his next titled Kill Dil.

We came across these images on the internet that features Ranveer in a good boy image sans the facial hair, in a blue blazer on sets of the film. While the other pic shows him riding on a bike with Ali Zafar.

Kill Dil that is said to be a romantic action flick directed by Shaad Ali and produced by Aditya Chopra also features Parineeti Chopra, Ali Zafar, Govinda and Rani Mukerji in the lead roles. Currently being shot in Delhi, the film is scheduled to release in 2014.