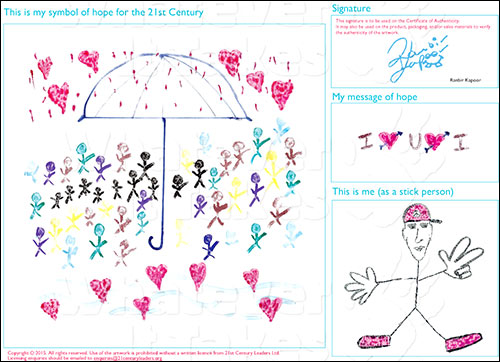 It has been rare sight to see Ranbir Kapoor getting up and personal about his life but the actor surely has a way to show his support for kids. Ranbir has decided to do his bit for 'Whatever It Takes' initiative which works towards the welfare of children.


For the exhibition of World Art Dubai which will be held at the prestigious Dubai World Trade Centre from April 8 onwards, many works created by celebrities will be at display. Amidst the likes of Katy Perry, George Clooney, Daniel Craig, Charlize Theron, Nicole Kidman, Ranbir Kapoor's art work will also be at display. Here's a glimpse of it.


The funds raised through its sale will be donated to the charity causes globally which also includes the 'Whatever It Takes' campaign. Happy about the response the campaign received, Trixie LohMirmand mentioned that the artists were asked to display their work revolving around the principle themes but were not bound by any restrictions which allowed them to freely interpret and design their artwork as per their will.