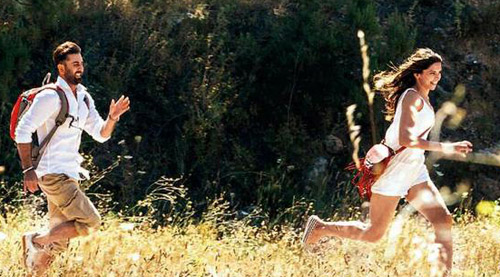 The highly anticipated Tamasha is not just a film about love but it also explores some picturesque and unique travel destinations. One of them is Corsica. From churches to the sea to the fields, the film has been shot in some beautiful locations and hereâ€™s yet again a glimpse of the same.

A picture of Ranbir Kapoor and Deepika Padukone running on the fields located in Corsica has gone viral. Deepika looks picture perfect in the white jumpsuit and a funky sling and Ranbir too looks
suave in the casual avatar. Directed by Imitiaz Ali, the film, set in the backdrop of drama and theatre, is said to be about two people with different ideologies, who fall in love during a journey.

Produced by Sajid Nadiadwala and UTV Motion Pictures, Tamasha is slated to release on November 27, 2015.