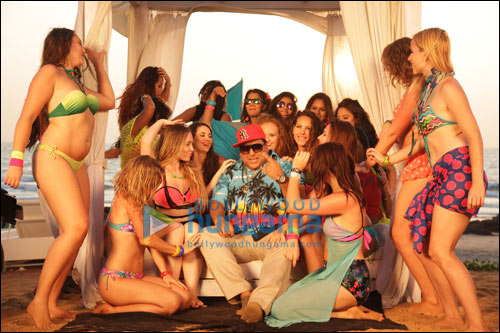 Ram Kapoor will be seen in yet another comedy and this time he will be sharing the screen with the sizzling Sunny Leone in his upcoming film Kuch Kuch Locha Hai.

Sources reveal that Ram's character as a Gujarati businessman living in Malaysia will have unique antics that will add humour to the film. In fact, he will also turn a rapper for one of the song sequences wherein he will be grooving with his co-star Sunny Leone. Here's a glimpse of the peppy number in question. Ram, surrounded by bikini-clad girls, is seen sporting a summery Hawaiian shirt and cap along with cool shades.

Also, it is being said that the actor had a blast along with the rest of the crew whilst shooting for the song. Says director Devang Dholakia, "Ram is an actor par excellence and with our film, he has proved that he can do anything. His comic timing is fabulous and his hip hop avatar is going to have the viewers grooving with him. I'm really happy to have worked with him and look forward to doing more films with him."

Ram Kapoor to play a psycho killer in Abhay…