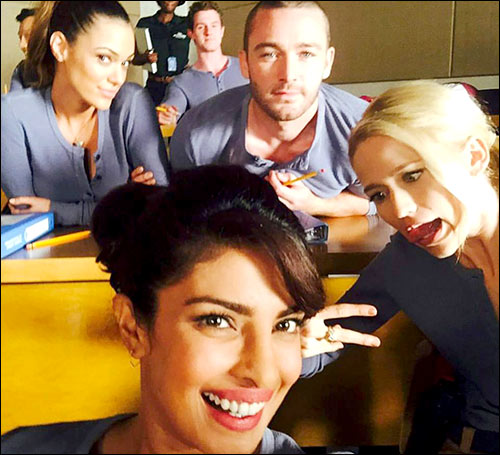 By now, we all know that the fiery actress Priyanka Chopra has signed up for the international show 'Quantico', in which she plays the daring FBI trainee by the name of Alex Parrish. Priyanka Chopra took to a popular social networking site today and posted a handful of images from the shoot of the show. Going by the looks of it, Priyanka Chopra is (quite literally!) sweating it out to give her best in the show.

She captioned the image as "Such dejavu to shoot on the eve of ?#?OneYearOfMaryKom? Alex Parrish killing her angst in the gym!... ?#?Quantico?". She also posted a 'classroom image' which has her alongwith her co-stars. To which, she captioned "What do we learn in class today!!! Not much!! ? #?ClassroomShenanigans? ?#?Quantico?".

Priyanka Chopra reveals how she avoided…