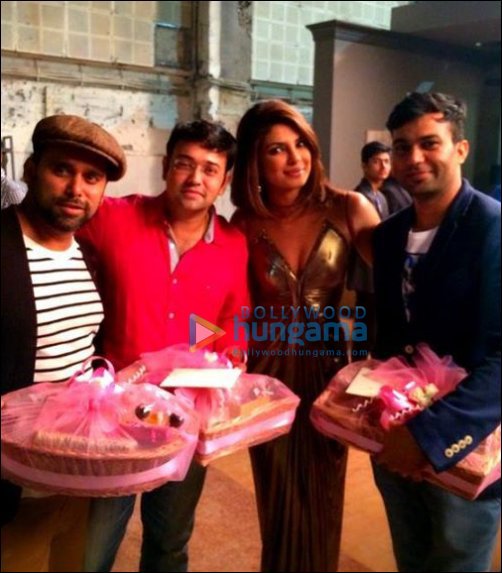 Amidst busy schedules and professional commitments, Priyanka Chopra doesn't miss out any opportunity to thank her team who has been her support system as much as her family and colleagues have been in the industry. In a sweet gesture of sorts, Priyanka Chopra decided to reward her team at Purple Pebble Pictures, her own production house, after completing the ad shoot of a real estate firm under the banner.

The actress presented the staff, which included the head of departments as well as all the producers, executive producers and others a box of goodies including chocolates, cookies and a bottle of champagne along with a handwritten letter to everyone for their sincerity and hard work towards the company before flying to Los Angeles. The actress is currently in U.S. to fulfill the deal that she signed with the prestigious channel ABC and has decided to kick start her own show for the channel. Excited staff members have taken to Twitter to thank Priyanka Chopra for her wonderful gesture and have expressed their happiness over it.

After completing her international projects, Priyanka Chopra will once again return to India, to start with her first production venture Madamji along with director Madhur Bhandarkar. She will also be seen as the parallel lead alongside Ranveer Singh and Deepika Padukone in Sanjay Leela Bhansali's dream project Bajirao Mastani.