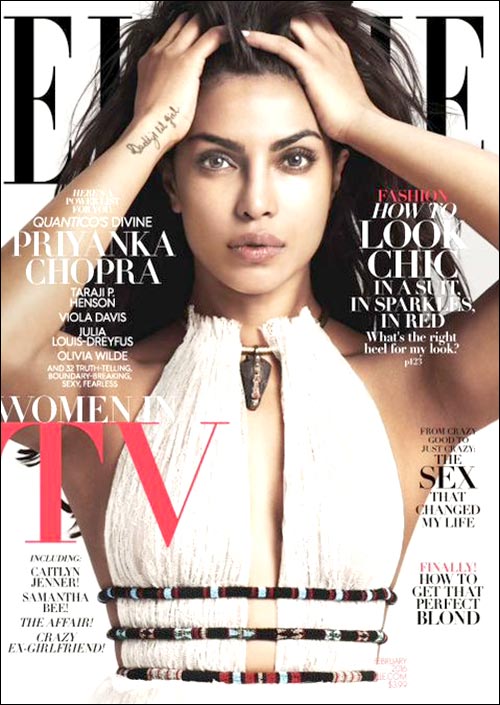 While she definitely became famous after winning the title of Miss World in 2000, she has now become a star whose reach has extended far beyond India. The actress who recently added yet another feather to the cap by winning the award for her American TV debut 'Quantico' has now also featured on the cover of Elle, U.S. edition.


Priyanka Chopra, who debuts on the U S fashion magazine, has turned cover girl for this edition along with four other individual covers. The actress is seen on the cover in a lace mini dress, accessorizing it with a gold choker, both from the Valentino Spring Summer 2016 collection. Priyanka Chopra has been selected as one among the 32 ground breaking, sexy, fearless women on American television along with Taraji P Henson, Julia Louis Dreyfus, Olivia Wilde, and Viola Davis who too have posed for different covers in this edition. These five actresses reveal about their experience of working in the TV industry as Priyanka Chopra also talks about the striking differences between films and television.


On the Bollywood front, Priyanka Chopra also garnered few awards in the Best Supporting Actress category recently for her performance in Sanjay Leela Bhansali's Bajirao Mastani. The actress will soon be seen in Jai Gangaajal as the only woman cop fighting corruption in a small town in Uttar Pradesh, India.