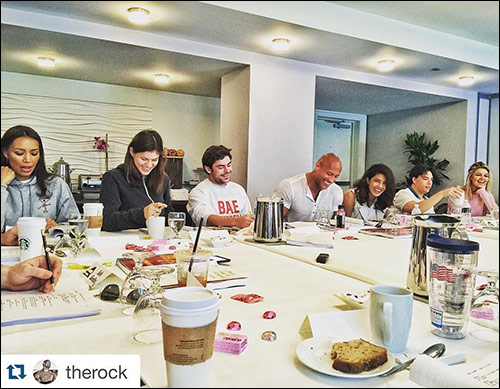 Recently, Priyanka Chopra took to social media to announce about her much coveted Hollywood project Baywatch starring The Rock - Dwayne Johnson and Zac Efron. And here is the actress once again giving us a glimpse of the on the sets fun of Baywatch.


Dwayne Johnson initially put up a picture on his Instagram page of the entire team enjoying a meal together with the caption, "Like a proud papa silverback, just look at this talented cool/hot #Baywatch cast.. @ilfenator, @alexannadaddario, @zacefron, @priyankachopra, @kellyrohrbach, @thejonbass and some tatted up, bald brown man with a large head. This squad has been working extremely hard for months for these roles - the time has come - we start shooting TOMORROW. Let's roll and bring the world some beach fun. #BAYWATCH #LifeguardsOnDuty #AndZacHasNiceTits". Further reposting the image on her Instagram page was Priyanka Chopra who also added, "Good luck for Tom #Baywatch Squad! Play while the cat's away!! C u soon @alexannadaddario @zacefron @therock @kellyrohrbach @ilfenator @thejonbass". Priyanka Chopra, we hear, will be joining the shoot schedule of Baywatch by the end of this week.


Priyanka Chopra is currently having a hectic schedule considering that she will be promoting her upcoming Bollywood release Jai Gangaajal, simultaneously shooting for the second season of the TV series 'Quantico' along with handling the production of two regional films under her banner Purple Pebble Pictures, namely Marathi film Ventilator and a Bhojpuri film.