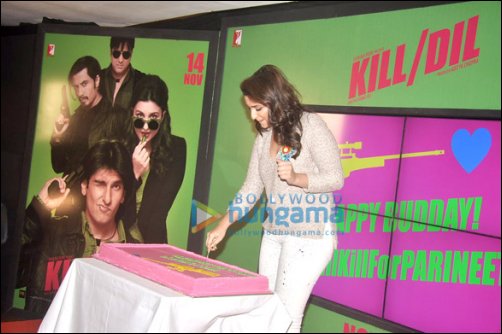 Starting her career as a supporting actress, Parineeti Chopra is one of the most sought after actresses in the industry. She has been busy with the promotions of her upcoming film Kill Dil and the actress took up the opportunity to celebrate her birthday.

At the launch of the latest song from the film 'Sajde', a sizzling romantic number featured on Parineeti Chopra and Ranveer Singh, the actress was spotted cutting a huge cake amidst her team and media. Thrilled about the celebrations, Parineeti Chopra was in high spirits and even decided to shake a leg with her fans on stage, during the launch. Though the said song had Ranveer and Parineeti in the video, the makers decided to coincide the launch with her birthday, to celebrate the occasion.


Produced by Yash Raj Films and directed by Shaad Ali, Kill Dil also stars Govinda and Ali Zafar and it is slated to release on November 14.