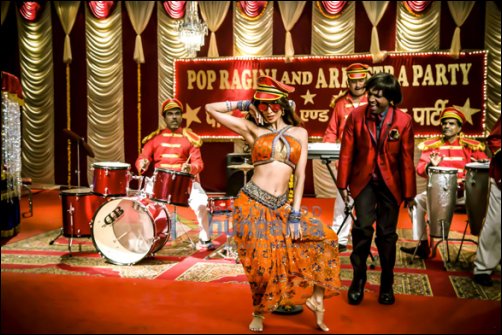 If there be a crown of the 'undisputed item number star of the decade', the only person who is bound to win this hands down is none other than the simply ravishing Malaika Arora Khan, who still oozes the same amount of glam, Ã©lan and pose as much as she did when she did her first song. With her hubby Arbaaz Khan presently producing Dolly Ki Doli, can Malaika's item number in the film be far behind!

Bollywood Hungama got its hands on the first look of Malaika's item number in the film titled 'Fashion Khatam Mujhpe'. Going by the looks of it, it's only needless to say that Malaika has yet another (item) winner in her hands!


Dolly Ki Doli is about a con-girl who robs men by faking her marriage. Directed by Abhishek Dogra, the film stars Sonam Kapoor along with Pulkit Samrat, Rajkummar Rao and Varun Sharma in prominent roles and has cameos by Saif Ali Khan and Malaika Arora Khan. The film is slated to release on February 6, 2015.